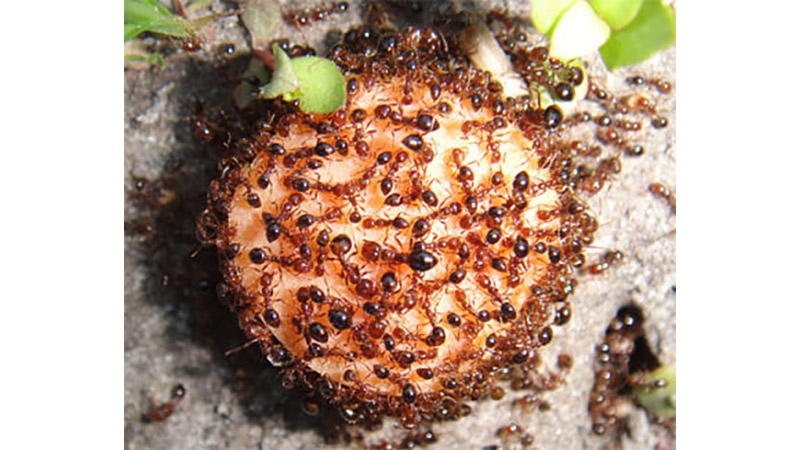 The red imported fire ant is causing a major concern for livestock production and landowners in the county.

The red imported fire ant commonly found in Virginia’s tidewater region is making its way into Lunenburg County, potentially creating a problem for producers and landowners.

“I discovered fire ants in Lunenburg for the first time this year and they are starting to present a problem,” Extension Agent Lindy Fimon said.

According to the Virginia Department of Agriculture and Consumer Services (VDACS), the ant is problematic due to the large mounds that it builds and the ant’s ability to sting or bite in large numbers.

“A major concern for livestock production is calves being born near mounds,” Fimon said.

The red imported fire ants live in mounds; the mound is usually noticed prior to seeing the ant itself. The mound appearance is typically large, and dome shaped. The average size of a mound is 10 to 24 inches in diameter and 6 to 18 inches in height. However, mounds may be larger in clay soils, reaching 2 to 3 feet in height. The ants will feed on any plant or animal material, dead or alive.

Because these ants are becoming such a problem, the VDACS is working with landowners to assist with mound treatment to help curtail the spread.

According to the VDACS, fire ant mounds are typically found in warm, sunny locations such as landscape beds, lawns, trees and shrubs, along sidewalk cracks and against buildings. If disturbed, these ants are generally aggressive and can inflict painful stings.

If you believe you have located a red imported fire ant mound, contact VDACS at (434) 808-2090. VDACS will determine if the mound is fire ants and will treat the mound for free. Please do not disturb the mound as this will cause the ants to move and make a new mound.