Fuqua heads into break winning 2 of 3 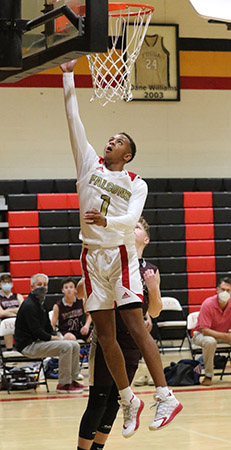 Fuqua School varsity boys basketball team co-captain Maureon Tisdale-Couch, of Victoria, has led the Falcons in scoring and rebounding each game so far during the 2020-21 season, helping guide the squad to its 2-1 start.

Fuqua School’s varsity boys basketball team completed the first two weeks of its 2020-21 season, with a 2-1 record for the 2020 portion of the schedule.

Falcons Head Coach Mike Edwards said he is feeling good about the state of his team three games into its 10-game season, which is abbreviated due to the COVID-19 pandemic.

“Me and my coaching staff, before the season started, we felt as if this year we were going to have to grind a lot of games out, especially with having a lot of new faces and a lot of new guys who are moving up from (junior varsity) to try to get used to the speed of varsity and just having a bunch of guys who have never played basketball before,” Edwards said. “So we are very happy that we are going into the Christmas holiday with a winning record.”

The Falcons closed out their 2020 play Friday, Dec. 18, when they traveled to face new Virginia Colonial Conference rival and host Banner Christian School and returned home with a 49-45 victory.

The game was a tale of two halves, with the Bearcats leading 24-15 at halftime.

“I felt like my guys were sleepwalking during the first half,” Edwards said. “In the second half, I think we woke up and realized that we needed to kick ourselves in gear. We scored 23 points in the third quarter.”

He said Fuqua also limited its turnovers in the second half, got more shots, made more layups and made its free throws near the end to help earn the win.

The Falcons opened the year Tuesday, Dec. 8, with a 45-38 home win over Brunswick Academy and then went to Amelia Academy on Friday, Dec. 11, falling only narrowly, 54-53. 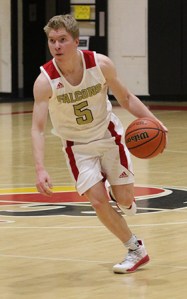 Fuqua School senior guard Jackson Allen, pictured here competing in the Falcons’ victorious season opener, helped his team to be highly competitive in the follow-up game by contributing 10 points and four assists, and he scored another 10 in the Falcons’ Friday, Dec. 18, win.

Reflecting on the season opener, Edwards said his team’s performance was exactly where he expected it to be given the circumstances.

“We came out kind of slow,” he said. “We’re still trying to get used to how things are looking and how we’re supposed to play, especially with COVID. But I was very impressed with how we closed the game out to knock down those key free throws to stretch the lead down the stretch. It was a great game to build off of, and it was a good way for us to go into the Amelia game with a little bit of confidence to see what we were going to play against.”

Leading the Falcons against the Vikings were Tisdale-Couch, with 21 points and 10 rebounds, and junior guard Braxton McClure, with nine points.

“We definitely had our chances to pull out the victory,” he said. “I’m happy with how our team played defensively, and more importantly, I’m happy how the team rallied around one another and was cheering each other on. So, team morale, I think, is really high, and that’s really what a coach is looking for is for everybody to be engaged.”

The Falcons also benefited from some other standout performances.

“James Minix really stepped up for us in key spots, knocking down shots down the stretch for us and Cody Fulford as well, knocking down two big three-point shots in that fourth quarter,” Edwards said.

The positions listed in association with players in this article are according to the team’s roster listed on MaxPreps.com, but Edwards indicated positions are going to be in a state of change on his team.

“My team is going to be moving around,” he said. “I’ve got guys who are playing point guard and center, I’ve got centers playing guard — our guys are doing any and everything.”

This is particularly true for Tisdale-Couch.

Fuqua (2-1) had been set to return from the holiday break Tuesday, Jan. 5, with a road game against Southampton Academy, but Edwards said that contest has been moved to Friday, Jan. 29.

“The conference felt that we needed a quarantine period coming back from break,” he said.
The Falcons are now set to return to action Friday, Jan. 8, when they host Blessed Sacrament Huguenot School at 6:30 p.m.