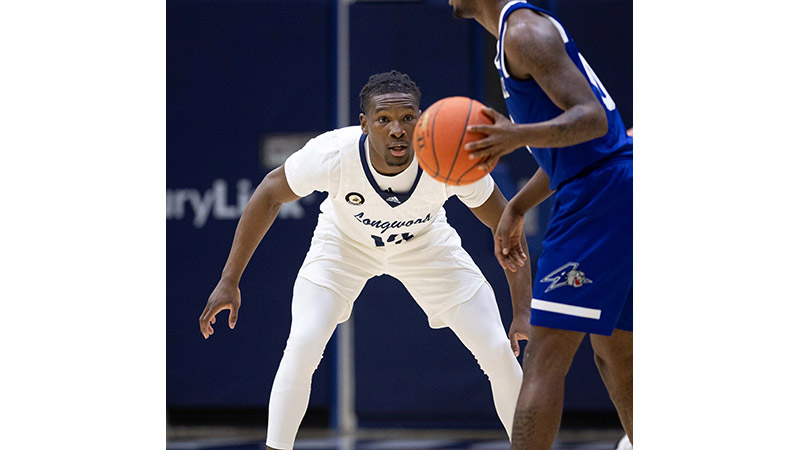 Longwood University sophomore guard Heru Bligen led the Lancers with 12 points in their narrow 71-69 loss to host USC Upstate on Monday night, Jan. 4. He was one of five Lancers to score in double figures.

Led by 19 points from Tommy Bruner and a 12-2 run in the final four minutes, University of South Carolina (USC) Upstate rallied to overcome Longwood University’s men’s basketball team 71-69 Monday evening, Jan. 4, in game one of the two-game series at the Hodge Center.

Bruner played 38 minutes and put the Spartans (2-9, 2-4 Big South) on his back in the final two minutes, hitting a jumper that cut Longwood’s lead to one point with 1:43 to play and then hitting a go-ahead 3-pointer with 57 seconds left in the game that gave the Spartans the lead for good.

Bruner’s back-to-back field goals came as part of a game-changing run over the game’s final 4:19 in which USC Upstate overcame a 64-59 Longwood lead. Brunner’s five consecutive points were the first of eight unanswered by the Spartans, who also got 17 points from Dalvin White and 14 from Everette Hammond.

“Credit Upstate for continuing to fight,” Longwood Head Coach Griff Aldrich said. “I thought they battled, I thought a couple times it looked like they got pretty tired, but credit them — they kept battling and made shots there at the end. They got good looks, executed and pulled the game out.”

That end-game effort was enough to offset a season-high five double-digit scorers from the Lancers (2-9, 1-4 Big South), who were led by a second straight double-digit effort from sophomore guard Heru Bligen. Bligen scored 12, followed by 11 points each from Justin Hill and DeShaun Wade, and 10 each from Juan Munoz and Ilija Stefanovic.

The widespread production built Longwood a lead as large as eight points in the second half. However, the Spartans turned the tables beginning at the 12:53 mark when Bruner responded to a Munoz 3-pointer with a jumper of his own, and White followed by making a 3-pointer that cut the deficit to 49-46. Less than two minutes later, White and Bruner connected on back-to-back 3-pointers that sparked an 8-0 run and reclaimed the momentum for the Spartans.

The loss is Longwood’s fourth this season by five points or fewer and the second such defeat in conference play.

“That’s been something we’ve been struggling with all season — finishing games,” Aldrich said. “We are a team that is fighting to learn that lesson, that you have to keep executing on every single possession until the final horn sounds. We didn’t do that tonight.”

USC Upstate hit 12 3-pointers, with White going 5-for-7 and Bruner and Hammond both finishing 3-for-7. The Spartans hit three of their final six treys, the last of which was Bruner’s go-ahead triple.

The Lancers shot 50% (27-of-54) from the floor, their highest shooting percentage since a 51.7% (30-of-58) performance in a double-overtime win at Gardner-Webb University on Feb. 1, 2020. However, they came up empty on six of seven possessions during USC Upstate’s late-game run until freshman Jesper Granlund hit a 3-pointer at the buzzer to close the final deficit to two points.

Excluding an 84-58 defeat at Virginia Tech, Longwood’s losses have come by an average of just six points per game this season. Four of those have been decided by one possession, including a 67-66 loss to Big South rival Radford University Dec. 14.