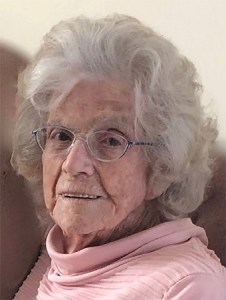 One of Geraldine Bailey’s foundational beliefs was, “Living for others makes your life worthwhile.” By that principle, she lived 101 fulfilled years and quietly went to be with the Lord on March 10. Born in Keysville on Nov. 9, 1919 to William W. and Mabel M. Palmer. Geraldine was the oldest living member of Cool Spring Christian Church, Keysville. Her family was blessed by her years of unwavering faith, Godly example, servant’s heart and devotion as a prayer warrior. Her faith was the foundation upon which every decision was based.

In 1940, she married Frank L. Bailey and they were together 74 years until his passing in 2015. They both lived through the Great Depression and learned the value of self-reliance and a good work ethic. Geraldine was happiest when working, whether with the tobacco crop, in her large vegetable garden, cooking Sunday lunch for family after church, caring for grandchildren, volunteering at church (teaching, cleaning or hosting revival preachers) or just carrying food to neighbors in need. Cooking was her specialty and she often made homemade cakes for the farm employees … just because.

Aside from her busy activities, Geraldine appreciated art, poetry and literature and was a voracious reader. She also enjoyed the simple pleasures of country life, birds and the beauty of the outdoors. She lived independently at her home until after her 100th birthday and then remained with caring family until her passing.

Family and friends are blessed to have years of beautiful memories and humble life lessons learned from the matriarch of the family. “With long life will I satisfy him and show him my salvation,” says the Lord. -Psalm 91:16