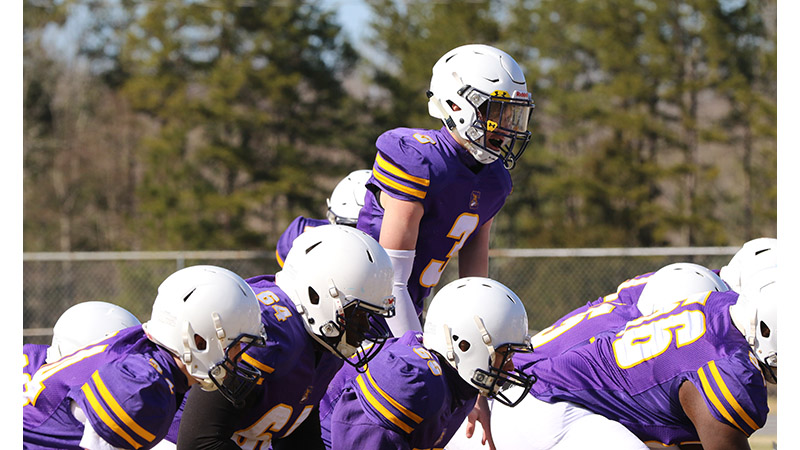 Goochland High School’s football team has blown out most of its opponents this season, and it has been dominant against Central High School in recent years, but Central made the Bulldogs work hard Saturday, March 27, to defend their undefeated status this spring.

Ultimately, Goochland, a Virginia High School League (VHSL) Class 3 team, was able to pull away in the second half for a 28-12 road victory to improve to 5-0 this season.

“I’ve got to give it to our players — they fought back,” Central Head Coach Will Thomas said.

He noted things started off poorly for his team, as the Bulldogs scored quickly after the opening kickoff, and then the Chargers offense was not able to do much to reverse the momentum.

“We get a few first downs, and then they go down the field and score again to make it 14-0,” Thomas said, adding that it appeared another rout was on in the rivalry between the two teams, but then his players showed resilience. “They impressed me, and they kind of shook the dust off and fought back, and we made it a game in the first half.”

Near the end of the first half, senior quarterback Tyler McGrath completed a pass to junior running back NyJae Carter for a touchdown to make the score 14-6 at halftime.

“In the second half, we had the ball first, and we started moving the ball a little bit,” Thomas said. “Of course, penalties got us, and our offense is not good enough to where we can overcome penalties, so it kind of put us in a hole.”

Central’s defense did what it could with that hole, though, and Thomas said his team’s defense played well.

“I have to give it to them,” he said. “They really fought hard.”

“Goochland, they’re very well-coached. They have good players. They’ve built a tradition up there through the years, so you’re kind of going against the trifecta there,” he said. “They’ve got all three. So if you beat them, you’ve really got to play your top game, and hopefully they’ll have some mistakes, and it wasn’t enough (Saturday).”

The coach said Central’s second touchdown came toward the end of the game courtesy of sophomore running back Kemarion “K.J.” Watson.

Thomas said he is not sure where his team stands in terms of postseason seeding for VHSL Region 1B.

“A lot of things could kind of break loose,” he said. “It’s a must-win game for us Friday against an improved Randolph-Henry team. They’re really playing well. They’re big, no question (they’ve) got some good players out there, real good passing team.”

The coach said the Statesmen are playing with a little bit of urgency because they need to win too to make the playoffs in Region 2A.

“It’s going to be a battle,” Thomas said. “It always is when we play them.”