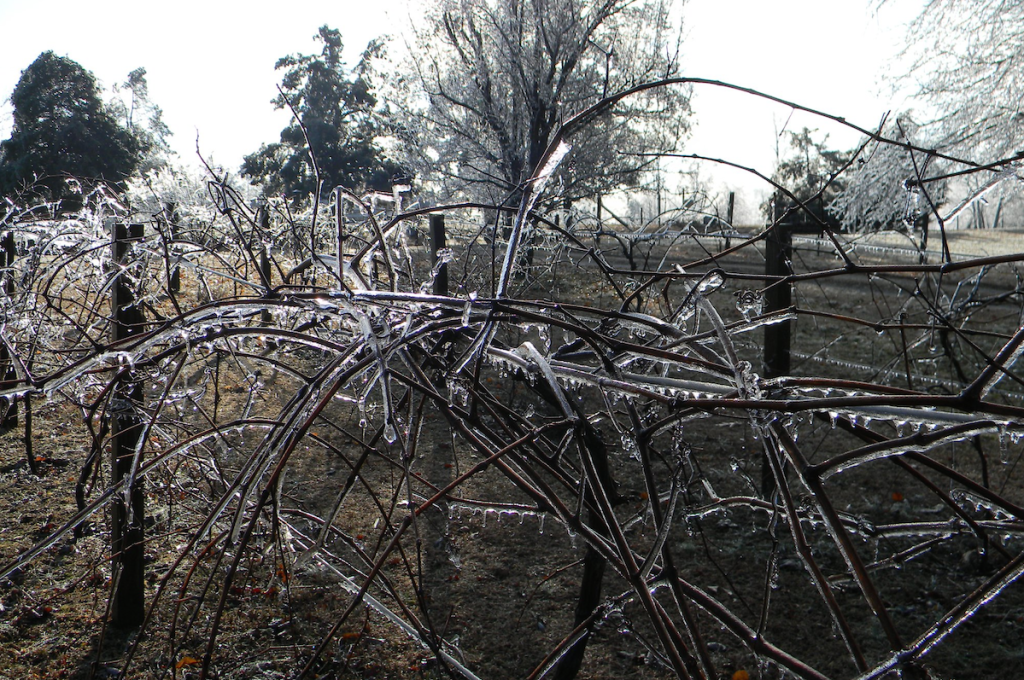 Ice wraps around vines during the winter storm at the Victoria Vineyard.

Lunenburg County officials are hoping the Virginia Department of Emergency Management (VDEM) will help with funding costs associated with the Valentine’s weekend storm that left thousand without power and tons of debris behind.

This amount does not include the cost of cleanup to the Towns of Victoria and Kenbridge.

According to Gee, the county used funds from the school and county general funds to cover expenses incurred from the ice storm.

Funds were used for shelter costs, staffing, shelter modifications due to the power outage and supplies for response to shut-ins,” Gee said. “The towns shared the cost of a grappler truck used for picking up the collected brush.”

Gee said the county and two towns would report costs for the winter storm to VDEM who will then report those figures to FEMA.

Gee did not elaborate as to if Lunenburg County would receive any federal funding to help recover from the ice storm.

Both the towns of Victoria and Kenbridge are continuing to clean up downed trees and debris and have yet to complete a final total of costs they have incurred due to the storm.

“We won’t know the total cost until we actually get finished with the cleanup process, which may be several more weeks,” Kenbridge Town Manager Tony Matthews said. “We have filled out paperwork and submitted it to VDEM for a disaster analysis, and we are hoping that due to the state of emergency, we will receive some aid for the removal.”

Matthews said currently, the town is using funds from the general fund for cleanup.

“We are making progress every day but are forced to be at the mercy of the weather and our normal duties within the town as well,” Matthew said. “Our guys have been working very hard lately, and I would like to give them a huge thank you, and I hope the citizens will join me in this.”

Victoria Town Manger Rodney Newton said they, too, are still not finished with debris cleanup and do not know the storm’s final cost. “We probably still have several weeks of debris pick up before we can say we are finished,” Newton said.

According to Newton, the Town of Victoria has also submitted initial damage assessments to VDEM in hopes of getting assistance with the costs but will not know that for some time.

“Funds to cover the costs are currently coming from general funds, but that may be partially reimbursed if assistance is approved,” Newton said.

Crews from VDOT are also continuing to clean up tree debris throughout the county, according to VDOT Richmond District Communications Manager Bethanie Glover.

Glover said VDOT still does not have a total cost estimate as to what the cleanup has cost in Lunenburg or the commonwealth to date.

“The cleanup process is still underway in Lunenburg, so we are still tracking costs at this point,” Glover said.

The VDOT Richmond District is working through VDEM to remove all documented tree debris from the roadsides under one of their existing statewide contracts, a process that is expected to be completed districtwide within the next two months.