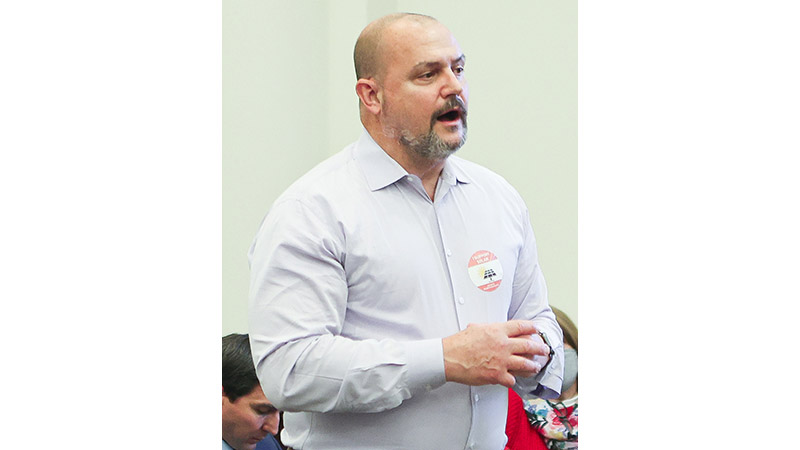 Francis Hodsoll of SolUnesco explains the Red Brick Solar Project to the Board of Supervisors.

Apex Clean Energy and SolUnesco, the applicants of Red Brick Solar, Lunenburg County’s first solar project, will have to wait yet another month to learn if its project is in accordance with the county’s comprehensive plan.

On Thursday, May 13, the Lunenburg County Board of Supervisors (BOS) held an information session to hear both sides of an appeal brought forth by Red Brick Solar following its defeat dealt by the planning commission in April when their motion died with a tie vote.

Do you believe the Board of Supervisors should approve the Red Brick Solar Project?

Citizens were allowed to express their concerns about the project during the public comment period Thursday. Of those speaking, only three spoke in opposition to the project.

Red Brick officials proposed to construct and operate a utility-scale solar facility located on 21 individual parcels of property. The project would place a solar photovoltaic power plant across 935 acres situated in north-central Lunenburg County, nearby the courthouse and about four miles southwest of Victoria.

In early May, John Puvak of Gentry Locke Attorneys, who represents Red Brick Solar, requested the BOS overrule the Planning Commission’s action and present his client’s contention that the Red Brick Project is in substantial accord with the county’s comprehensive plan.

“Our team is confident that the Red Brick Solar project is substantially in accord with the county’s comprehensive plan, which was amended in 2019 and called for the consideration of the safe development of solar energy,” Natasha Montague, public engagement manager for the project, said. “In addition, consistent with the comprehensive plan, Red Brick Solar will protect and preserve the natural resources of the community while also promoting the expansion of a diversified economy and a clean-living environment. Finally, the Red Brick Solar project will provide significant long-term revenue to the county, which is estimated to be approximately $12.1 million over the life of the project.”

During last week’s BOS meeting, Puvak addressed members, telling them that Red Brick Solar has demonstrated that the project is substantially in accord with the Lunenburg-Kenbridge-Victoria Joint Comprehensive Plan dated 2019-2024.

According to Puvak, the project’s location is 100% timber land, and the project will provide the county with an increased revenue stream.

“This project will have a meaningful impact on the county’s commercial tax base,” Puvak said. “This project will create $197,000 in additional tax revenues/revenue share in the first year of operations and every year over the life of the project with 10% increases in this amount every five years.”

According to Puvak, this results in a $12.1 million in cumulative county revenue of the projects’ anticipated 40-year life span.

According to the Planning Commission, the projected revenue share has yet to be determined and does little for economic development.

“Tax payments are not and should not be confused with economic development,” the commission said. “Electrical power is a fungible commodity, not necessarily a catalyst for development.”

In addition to Puvak, CEO Francis Hodsoll of SolUnesco addressed the BOS.

Hodsoll said that his company spent a couple of years looking at hundreds of sites and talking to landowners before coming to decide on the Lunenburg site.

Bradley Foster, a Lunenburg native now living in Appomattox, said he hopes to return to the county one day.

“To be honest, I don’t know much about these solar projects, but what I do know is it’s time to bring income-producing industry back to Lunenburg County,” Foster said. “And I think that the solar projects are the first step in that direction.”

Twenty-one-year-old Makla Lee told the BOS that although she had not been around long enough to know the past history of the county and how things once were, she did want to see the county thrive.

“I know I want it to be more than what it is today, not just for my family and me but for all of the county residents.”

Lee used farming as an example to drive her comments home.

“A lot of years ago, when Lunenburg started farming, they started plowing hundreds of acres of land and tearing down trees,” she said. “Trucks were going up and down the roads. It’s noisy and it’s dirty, but it put those dollars into our economy, and despite all of this, I think we can all agree that it is and it was progress.”

The BOS did not make any decision on the Red Brick Solar Appeal on Thursday evening.

According to County Attorney Frank Rennie the BOS will vote at its June meeting.

If the BOS determines the solar project is substantially in accord with the county’s comprehensive plan, Red Brick officials said they would be submitting a conditional use permit (CUP) application to be reviewed through a public hearing process with the Planning Commission and Board of Supervisors.

Assuming the CUP is approved, the Red Brick Solar project will still need to obtain state-level water and environmental permits from the Virginia Department of Environmental Quality.