SEC on ice storm: ‘I think we did a pretty good job’ 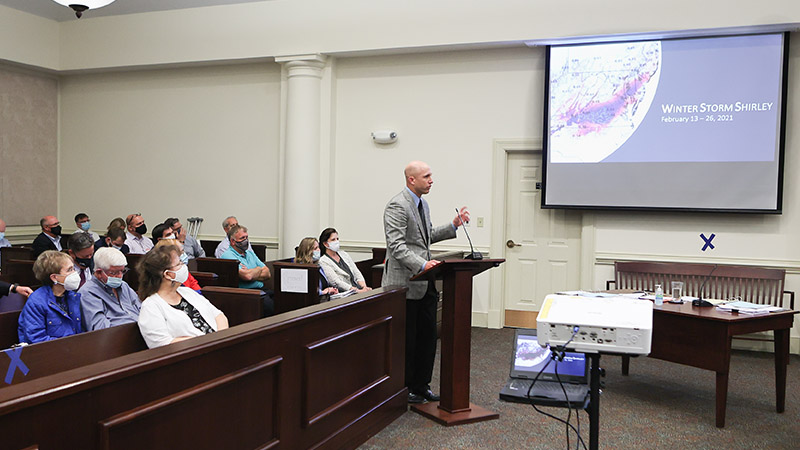 Southside Electric Cooperative Vice President of Finance and Corporate Services Jason Loehr addressed the Board of Supervisors Thursday, May 13, telling members falling trees were the leading cause of power outages for the company.

SEC President and CEO Jeff Edwards attended the meeting but did not speak.

During and following the ice storm, SEC and Edwards came under fire as to how the company handled the widespread, lengthy power outages and what some say was a lack of preparedness and communication with its members.

During his address to the BOS, Loehr said the State Corporation Commission (SCC) is reviewing SEC’s handling of the Valentine’s weekend ice storm that left thousands in the company’s 18-county service area without power, some for as long as 13 days.

The SCC is a state agency with regulatory authority over many business and economic interests in Virginia, including public utility regulation.

“We are expecting that report back very soon,” Loehr said.

According to Loehr, the weekend storm was an ice and tree event for the company one where the epicenter of the storm “fell right on top of them.”

Loehr said that fallen trees were the leading cause of power outages for the company.

“There are 2.2 million trees along SEC’s maintained right of way, Loehr said. “Trees were falling on polls and conductors.”

According to Loehr, SEC spends upwards of $4 million each year on vegetation maintenance programs to manage trees on its right of way.

Following the storm, SEC was hit with many members inquiring why the utility company has not put its power lines underground.

“Our members would not be able to afford that,” Loehr said, “The cost to move lines underground would be over $1 billion.”

“We are continuing recovery efforts,” he said. “Our system is still damaged and still healing, and it will continue to heal.”

According to Loehr, the February ice storm cost SEC $21 million compared to the last big storm – Hurricane Michael, in which SEC said the cost totaled $2.4 million.

“Don’t wait until the event. Let’s talk about it a week out from the event,” Hoover said.” Let’s, have conference calls and deal with that because I think that was one of the keys here, and I know that was certainly a frustration to the constituency about that real-time information.”