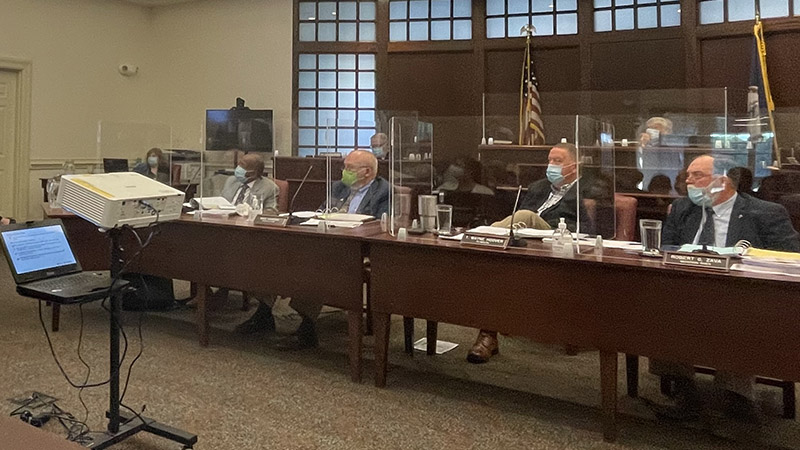 Lunenburg County Board of Supervisors viewed a proposal presented by Cheryl Giggetts, a principal consultant with CTA, concerning the county’s new E911 radio communication system during its Thursday, May 13, meeting.

The Lunenburg County Board of Supervisors (BOS) unanimously voted to take the next steps in moving the county further in developing a new E911 radio communication system.

The new system, which could see construction begin next summer, will cost the county around $3.8 million.

An $89,000 State Homeland Security Grant will assist the county with the process.

During the Thursday, May 13, BOS meeting, Cheryl Giggetts, a principal consultant with CTA, presented the radio system proposal evaluations from two companies which submitted bids for the project.

While L3Harris’ quote for the new system was around $3.8 million, MCA was quoted just over $6 million.

“Based on the evaluation of proposals, CTA recommends Lunenburg County issue a Notice of Intent to Award L3Harris Technologies, Inc., and begin negotiations on a contract.” Giggetts said.

According to L3Harris, the proposed radio system has built-in redundancy so that any radio frequency site can operate the control point.

“L3Harris’ proposed design guarantees 97% countywide mobile coverage, 97% countywide portable outdoors, and 95% portable indoors light buildings service area.” Giggetts said. “Users will be able to push to talk with those they need to, and equipment is no longer a barrier.”

In April 2020, the county hired CTA, an independent public safety consulting firm providing engineering and project management services based in Lynchburg, at the cost of $38,000 to perform a radio system evaluation.

According to Giggetts, during the evaluation, CTA spoke with personnel from police, fire, EMS, public works, the school system and animal control to learn what problems they are facing and their needs.

“Inoperability is a problem,” Giggetts said. “We heard user concerns of lack of coverage, lack of tactical channels, aging equipment, delays, and interference.”

According to Giggetts, upgrading the existing systems within Lunenburg County will provide the needed public safety grade coverage, capacity, and interoperability for all current public safety and non-public safety radio users within the county for the next 15 years.”

The new system is proposed to be used for not only fire and EMS but the school system as well.

“This has been an overdue project that we have discussed (for) a few years, but it has become critical in the last year,” County Administrator Tracy Gee said.

According to L3Harris, the new system should be operational by the end of 2022.