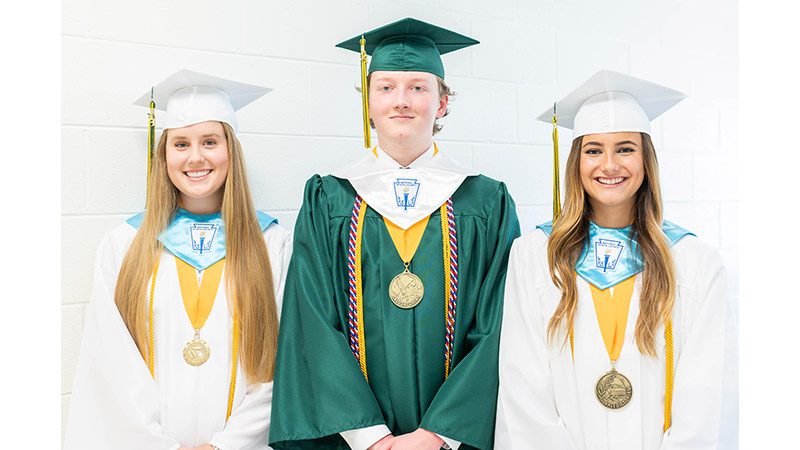 Thirty-three seniors received diplomas from Charles Butts, president of the Lunenburg-Nottoway Educational Foundation and Lori Bacon, KFS head of school.   Nine of the seniors are second or third generation Kavaliers.

The following students received awards during the graduation ceremony.

Mallory Barnes was named the winner of the Justin Hart Brandon Memorial Award.  The award was established to recognize a rising senior member of the Class of 2021, selected by the faculty, in hopes that this award will provide the honored student with the incentive to surpass his or her own expectations. Due to our closed graduation ceremony last year the recipient of the award was not recognized.  Barnes proved to be even more deserving of the during her senior year.

Camille Bacon was recognized with the Governor’s Scholar Medallion for earning her associate in arts and science degree conferred by Southside Virginia Community College.

Austin Dornak was named the recipient of the Carl Burton Schwabenton Memorial Scholarship. This scholarship recognizes a student who has excelled in history, government, and English.

Ariana Mannino was awarded the Marian Anzolut /Martha Hoefler Memorial Scholarship. The  scholarship is awarded to a senior who plans to seek further education beyond high school through vocational school, community college, or a four-year college or university and has shown excellence in the classroom, participated in extracurricular activities, and embodies the Kenston Forest School spirit.

Mya Mahaney was given the Kenston Forest Alumni Association Scholarship. The scholarship recognizes an outstanding graduating senior who has shown extended interest and service to Kenston Forest School and plans to further his or her education.

Mahaney and Geoffrey Tozzi were awarded the Kenston Forest Parents Association (KPA) Scholarship. The award goes to one graduating male senior and one graduating female senior who has shown outstanding citizenship and plans to further his or her education.

Molly Epperson was given the Adam Bryant Memorial Scholarship. The scholarhsip was established by the United States Coast Guard Academy Class of 2003 to honor LT Adam Wade Bryant.  It is awarded to a graduating senior who best portrays a dedication to academics, leadership, and a strong commitment to serving in the community.

Tozzi also was awarded the N. Burton Allen Distinguished Graduate Award recognizing a distinguished graduate who is a member of the National Honor Society, best exemplifies the mission statement of the school, and demonstrates great dedication to the students and institution of Kenston Forest School.