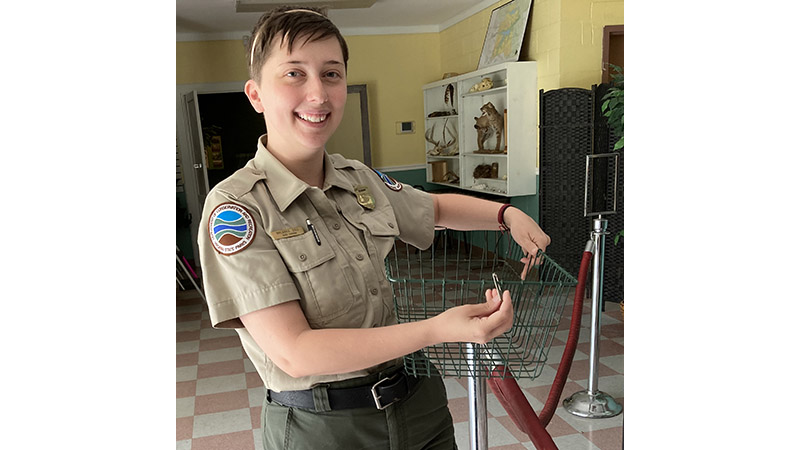 Twin Lakes State Park Chief Ranger Breanna Doll holds one of the baskets used at the park during the segregation era. Black park goers used the baskets to store their clothes and other belongings while they swam and picnicked at what was then called Prince Edward State Park.

Rangers at Twin Lakes State Park found hidden treasure while spring cleaning this year by uncovering an artifact that brought the park’s history to life.

Originally named Prince Edward State Park, the park was the only Virginia State Park accessible to African Americans when it opened in 1950. People from across the commonwealth, and even other states, traveled to Prince Edward County to swim, dance, picnic and camp at the lake. Records show weekend attendance at the popular hangout spot was sometimes in the thousands, with one ranger reportedly counting 22 buses in the parking lot on a single Saturday afternoon.

For many locals, the lake was like a second home. Some spent virtually every weekend at the park. For others, especially those who lived far away, the opportunity to visit was rare, and many did not own their own swimsuits. For those folks, the park had bathing suits available for rent.

Whether a visitor wore their own or a rented suit, they needed a safe place to stash their day clothes while they swam. People who visited the park during the 50s and 60s recounted the park’s clever storage solution for such items: numbered safety pins and baskets.

Visitors’ items were held in numbered baskets, stored in the “Basket Room,” while they swam. Attached to their swimsuit would be a safety pin stamped with their basket number. When it was time to change out of their suit, they could return their safety pin to a ranger who would retrieve their basket.

To this day, rangers still call this storage room the “Basket Room,” despite their being no baskets there. In fact, none of the rangers who currently work at the park had ever seen one of these baskets—until this spring.

It may not seem like much, a few baskets and safety pins, but the park has very few physical artifacts from that era.

Plans to incorporate these precious few items into a new museum-quality display are underway, and members of the public are always invited and encouraged to share any historic park memorabilia they may have.

For family photos and other precious items, rangers are able to scan and/or photograph and return them. Visitors of Prince Edward Lake State Park are also welcome to visit with rangers to share their memories of that time so they may be preserved and used to further educate people about the park’s past.