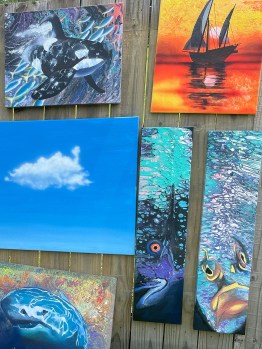 Ragland has spent many years painting artwork in a variety of media including oils, acrylics and paint pours. 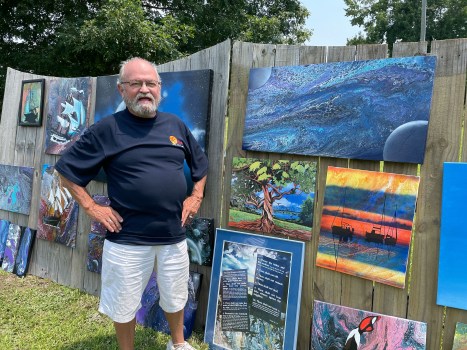 Benjamin Ragland often displays his many painting in his front yard in Kenbridge in hopes of selling a few of his masterpieces. 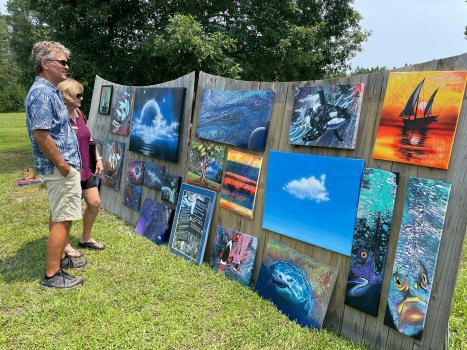 Robert Clements and his wife stopped by to view Ragland’s artwork.

If you travel along Highway 40 between Kenbridge and Blackstone, you may get lucky and see one local artist and his creations.

Benjamin Ragland, a retired Navy veteran, now spends his days painting a variety of scenes in mixed media, placing them in his yard for those who pass by to view and hopefully purchase.

Ragland paints when the mood strikes him these days, too.

“I paint when I feel like it. I may start a painting, and it may sit for weeks or a month, and when the mood strikes me, I start to paint.”

This form of abstract art uses acrylics mostly with a runny consistency to create psychedelic paintings.

Recently on a hot summer Thursday afternoon, Ragland was out and about showing and telling those who stopped by about how he creates his masterpieces.

From farm animals, space scenes, Bible illustrations to sea life, the artist brings to life his paintings in the way he tells the story behind how each was created.

“Sometimes I may just paint the background and let it sit for a month,” Ragland said of one of his paint pour pieces.

Ragland said he did one paint pour, and it just looked like water to him, which lead to another masterpiece.

“I said it just looks like water bubbling; what it needs is a fish under there, and boom, there it is,” Ragland said.

Ragland said he has been painting for as long as he can remember.

“I wanted this to be my profession, but it just didn’t work out,” Ragland said. “But I did make my living as a graphic artist for many years. Now I paint what I want.”

With many pieces of artwork in his collection, Ragland does have one masterpiece that he is most proud of.

Ragland said it took him six months to complete a 10×10 painting on the floor of a church in Blackstone. “That’s probably my favorite artwork I have done,” Ragland said.

Ragland received a Graphic Arts Management Certificate from Holden School of Art and Design in Charlottesville in 1972. He was an Illustrator/draftsman in the U.S. Navy from 1973-1976. He graduated from Virginia Commonwealth University in 1981 with a Bachelor of Fine Arts in Communication Arts and Design.

Over the years, He has worked as a free-lance artist, art director of an advertising agency and refinisher.

For those interested in obtaining artwork from Ragland, he can be reached at raglandarts@aol.com or by calling (804) 484-2571.