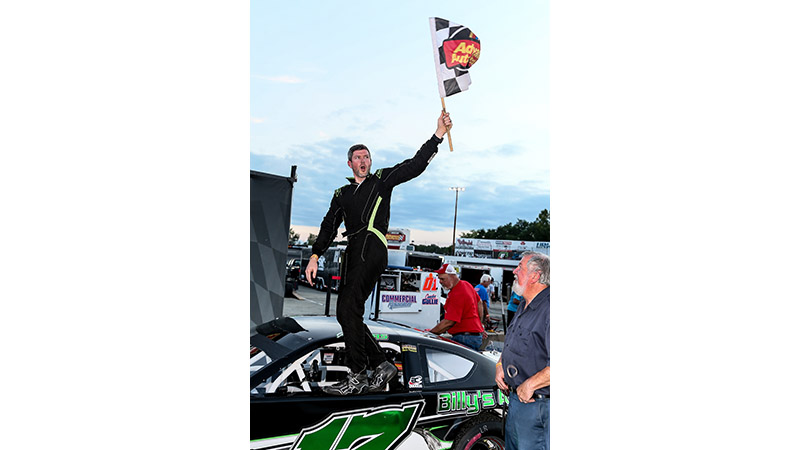 When Jason Myers started his racing career in the Limited Sportsman Division ranks four years ago, he had one primary goal – win a race.

“I could have never dreamed this,” Myers remarked after scoring the sweep. “Four years ago, when I started racing, I wanted to get one win in my career. To get two in one night, it’s special.”

Winning the pair of 25-lap Limited Sportsman Division races is a huge bright spot in Jason Myers’ racing career and in his 2021 season. Myers has had a fast car all season, but tough luck and unexpected misfortunes have virtually taken him out of contention to win the division title.

“We’d been really good all season, but we just had a lot of bad luck,” Myers pointed out.

“It’s been horrible. We keep throwing money at it (the car) and hope that it sticks. All year we’ve been very competitive and just haven’t had a lot of results to show for it.”

Myers was winless entering the August 7 twinbill, had two poles, and had managed only two Top-Five finishes in nine starts. He had not scored a Top-Five finish since May 15 and was virtually out of contention for the division championship. It was a tough situation to swallow after having entered the 2021 season on an optimistic note with the hope of scoring a win and being in the thick of the battle for the division championship.

“We always come into the season with big expectations,” Myers said.

“You have to. With another season dwindling away where we hadn’t had a win, you start to put doubt in your mind. You’re like ‘can I really win?’ Everything just came together tonight.”

Myers will be looking to add to his win total when NASCAR racing returns to South Boston Speedway on Saturday night, August 21 with the Italian Delight Family Restaurant Night at the Races presented by Southside Disposal racing program.