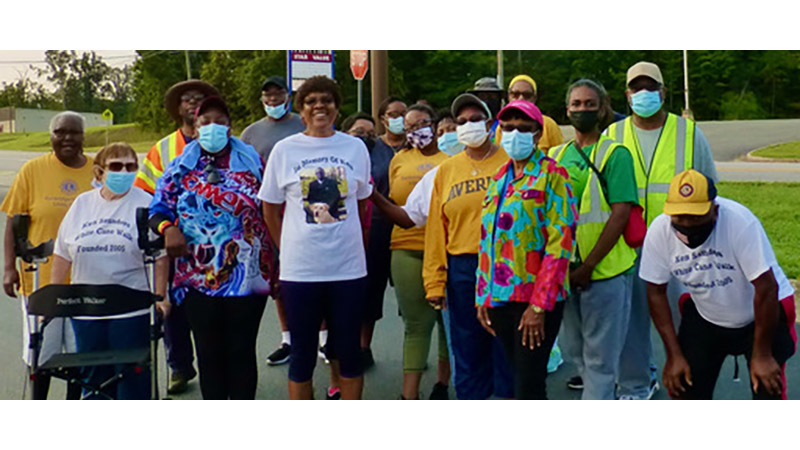 A group of 15 walkers made their way to Kenbridge, taking little more than an hour to complete the walk.

The late Ken Saunders started the walk by club members and friends from Victoria to Kenbridge in 2005 as a fundraiser for the Kenbridge-Victoria Lions Club.

“He did it for many years and was always the first to arrive,” club member Virgie Dow said. “He said in 2016 that it was going to be his last walk, and it was.”

Saunders, who was legally blind, made the walk from Food Lion in Victoria to Shoppers Value in Kenbridge for 11 years before he died in 2017.

The fact that Saunders was disabled didn’t stop him from beating his sons, nephews and anyone else who challenged him in basketball.

“He always won. He won at card games also. He had a garden that was the envy of all gardeners. He always made sure that Mom got her Thanksgiving collards first before opening up his garden to friends and neighbors,” Dow said.

He also raised chickens and donated the eggs to the Salvation Army in Victoria and neighbors.

“He had a strong competitive personality yet always exemplified kindness and helpfulness in the communities in which he lived,” Dow said.

In addition to supporting community projects to support the blind, the Lions club raises funds for other worthwhile causes.

Lions club members support the club with dues so that 100% of the money collected from the public goes to the public in some way.

The motto of the Lions Club is “we serve.”

The Lions Club President, Bonnie Alston, can be reached at 696-3557 if individuals are interested in contributing or becoming a member.