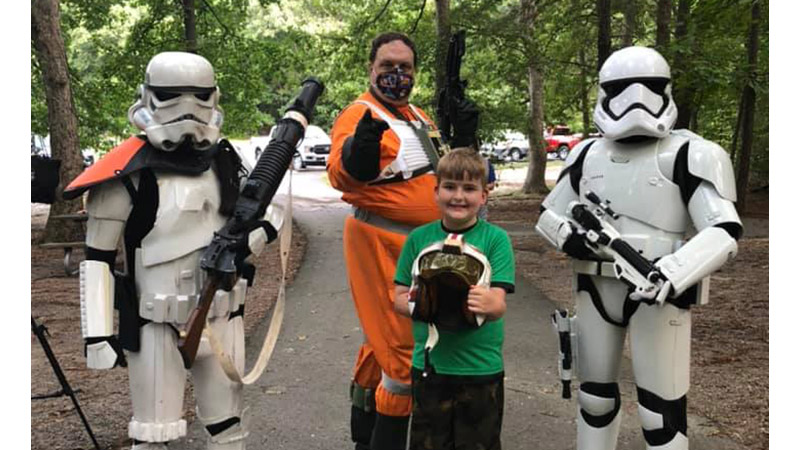 Gabriel Bratton, 10, of Victoria. had help from the Stormtroopers during the Children’s Tumor Foundation Shine a Light NF Walk. Bratton has been battling a rare genetic disorder since four months of age.

A ten-year-old Victoria boy is regaining use of his right hand thanks to a new medication following years of battling a rare genetic disorder.

At the age of four months, Gabriel Bratton was diagnosed with neurofibramatosis (NF), a genetic disorder that causes tumors to form on the body’s nerves.

“The disorder is like a tree, so this is like the roots of it, and it’s entwined in the nerves, and it’s very dangerous,” Julie Cranor, Bratton’s mom, said. “So, going on the medication was a no-brainer; it was either going to help, or it wasn’t.”

A little over a year ago, Bratton began taking the medication Koselugo, the first FDA-approved treatment for inoperable plexiform neurofibromas.

According to Cranor, while there is no cure at this time, her son’s tumor has shrunk by 20%.

“We were amazed, but to see how proud he was of himself for taking the medication, three pills two times a day, and to know his doctor was very happy with the results, was the best feeling in the world for us as parents,” Cranor said.

In an effort to raise funds for research and bring awareness to NF, Team Gabriel was formed.

On Saturday, Sept. 18, the Children’s Tumor Foundation held a “Shine a Light NF Walk” in Henrico’s Deep Run Park to benefit children suffering from NF and to walk and fundraise in Bratton’s honor.

“We cannot be more thankful to have an event like the Shine a Light NF Walk,” Cranor said. “It has made us realize how many people in our community are fighting just like Gabriel. It brings so much joy to see Gabriel interact with people just like him, and he sees them just as they see him, as ‘normal.’”

According to The Children’s Tumor Foundation, NF affects 1 in every 3,000 people of all populations.