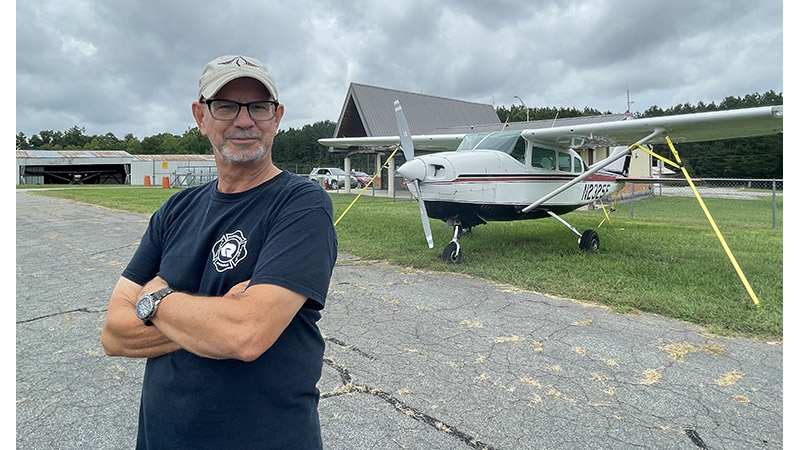 Lunenburg County Airport Manager Larry Way says the airport sees a variety of planes flying in and out each day. (Photo by Crystal Vandegrift)

Each month, pilots fly into and out of the Lunenburg County Airport, making the small rural airport an economic engine for the county.

“Airports, in general, are economic engines,” Larry Way, airport manager, said. “This provides jobs to county residents and supports businesses such as restaurants, hotels and other local businesses like hardware stores and part shops, for example, when individuals fly in.”

As for how much the airport generates in funds for the county, Way said it is hard to put a dollar amount on it.

“We just don’t have a way to quantify the real dollars that having an airport means in tourism dollars,” Way said.

It is estimated that the Lunenburg Airport handles 15 to 30 flights monthly, according to Way.

He said many business owners use the airport to save time by landing at the airport to get quick access to whatever local business needs their services as opposed to landing in Richmond, renting a car and driving to locations in not only Lunenburg County but other adjacent counties.

“We provide safe landing zones for Medivac flights and serve as a base for agricultural operations such as tree spraying or seeding of fields,” Way said.

Way said the airport can also be a safe landing area for pilots experiencing an in-air emergency. “Day or night, we are a safe place to land,” Way said.

In addition to a 3,000 feet long by 50 feet wide runway for pilots to take off and land on, the airport also rents T-hangars on a quarterly basis and currently has a longterm lessee in its large hangar on-site.

According to Way, Danny Bond, a pilot and mechanic, is currently renting a large hangar at the airport where he inspects and works on aircraft. “This is huge for a small airport like ours,” Way said.

With Bond on-site, people from all over the commonwealth and beyond have flown into the airport for service and in return spend some time and their money in the county.

“For a county with only 12,000 residents to have such a facility is unique,” Way said. “We are blessed that someone thought this would be a great investment in the future.”

Constructed in the 1960s, the Lunenburg Airport is somewhat smaller than the closest nearby airport located in Farmville.

“Farmville’s runway is 4,400 feet long by 75 feet wide,” Way said. “The FAA estimates 39 operations per day at Farmville while at Lunenburg it is estimated to be 32 per month.”

Even though the Lunenburg Airport is smaller than most, Way says each day offers something different.

“Planes do not have let us know they are coming, so when we hear them on the radio is the only announcement we get,” Way said. “One day could have 10 planes, the next none. There could be agricultural aircraft or aircrafts and their crew flying in… That is a good thing in my opinion. Every day is unique.”