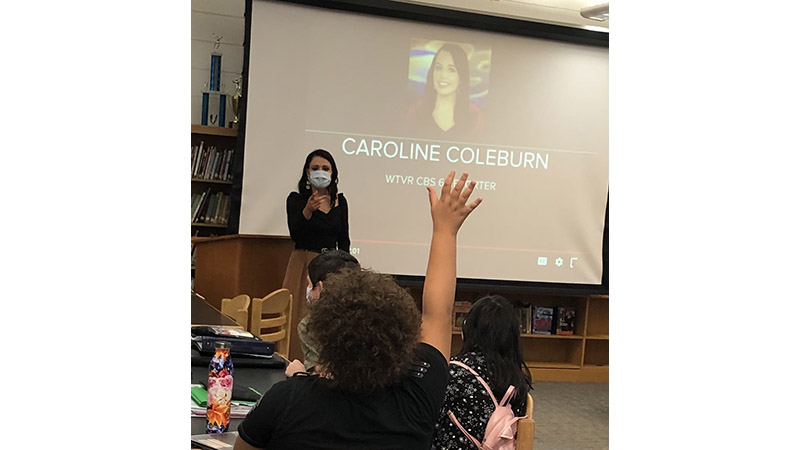 She encouraged students to follow their passion.  News is her passion. “News never stops. There are always fires, emergencies. That’s the thrill of the business,” says Caroline, who developed her love for news at a young age by tagging along with her father Billy Coleburn, Editor of the Courier-Record and Mayor of Blackstone.

Caroline shared that she gets up at 2:30 in the morning and her day ends around noon.  Students viewed news clips, and she explained to them that she was a multi-media journalist from the start.  She had to do it all.  She wrote, edited and shot her own stories.  Then and now, she has about four hours to get an entire story together.

Students asked Caroline if she had a dress code for work. She explained that she is expected to dress up and wears dresses almost always.

Caroline interned at WTVR CBS 6 when she was in college at UVA. She graduated with a degree in media studies and government.  She worked as a reporter and fill-in anchor for WVIR NBC 29 in Charlottesville after she graduated. She went on to WIS-TV in Columbia, South Carolina before moving on to her current position with WTVR CBS in March of this year.