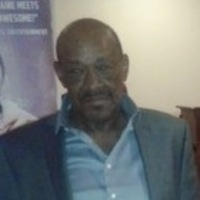 James T. Spencer was born to the late Frank Sr. and Hattie Spencer on Aug. 17, 1944 in Kenbridge. Early on the morning of Oct. 15, without so much as a wave of his hand, James laid down his sword and shield and ascended to the home prepared for him in heaven.

James was educated in the local school system of Lunenburg County. After graduating High School, James made the decision to relocate to New York City in search of a better life. Upon arriving in New York City, James became employed by Bloomingdales Department Store, where he was employed for almost 40 years.

Shortly after relocating to New York, James also fathered a son, Michael, whom he formed a special relationship with over many years.

Thereafter, James met and married the woman who would be the love of his life, Dorothy Wood. This union was blessed with two children, Gwen and Keshea.

James loved his entire family and most especially enjoyed spending time with his grandchildren. He also loved watching sports on television. His favorite sports teams were the NY Yankees and the NY Mets. He also enjoyed watching Jeopardy and Wheel of Fortune daily. James also enjoyed hosting Friday night card games, spending time with his Nelson Avenue neighbors and many co-workers that became close family friends. He also enjoyed excursions to Atlantic City and the Mount Eden Park when time permitted. One of his favorite past times was playing the daily lottery for fun and relaxation. A few years ago, James relocated back to his hometown of Kenbridge. This decision resulted in reconnecting to his family that lived in the area.

Viewing was held on Oct. 23, from 11 a.m. – noon, at Cornerstone of Deliverence Church, Kenbridge. Services followed at noon after viewing. Interment was in the New Grove Baptist Church Cemetery, Kenbridge.