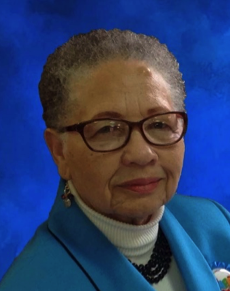 Eula Garland was born on Jan. 28, 1936, to Leroy Garland and Mary Agnes Crawley Garland in Lunenburg County. Her parents named her after a favorite aunt, Eula Garland, and she was the second born of ten children. She was a lifetime member of Unity Baptist Church. Her family affectionately called her Ma, grandmother and Aunt Eula.

Eula was educated in the public schools of Lunenburg County and graduated from Lunenburg High School in 1953. After graduation, she moved to New York and eventually married her childhood sweetheart, John W. Boswell—also known as Johnny. She travelled the world as a military spouse for the next 24 years. Her travels included France (Val’s birthplace), South Carolina, Oklahoma, New York, Panama, before and after the historic Panama riots in 1964 (Neicey’s birthplace), Montana, California and Alaska. They retired to Lunenburg County in the early 1970’s. After working as a weaver for a number of years, Eula discovered she loved working with senior citizens. That prompted her to return to school and complete her nurses aid certification. Eula was extremely thrifty and in 2002, she built and moved into her own home. She retired as a Certified Nurses Aid (CNA) from Community Memorial Health Center in the early 2000s. She loved going to church and delighted in the fellowship. She was proud of her membership at Unity Baptist Church and loved telling stories of walking to church as a youngster. We are immensely proud of all her accomplishments. She taught us how to be brave and self-sufficient and we always felt covered in her love.

Eula loved being around people and was always ready for a good laugh and tease. She was devoted to family and never failed to do what she could for anyone in need. She was extremely creative, and loved to sew, read, and put together—and flip through—photo albums. Her most favorite things to do were playing bingo, putting together puzzles, and beating somebody—anybody—at checkers, defeating all-comers, usually with a raised eyebrow and a chuckle. Even in her later years, nobody in the family could defeat her at checkers.

Eula was attractive in the truest sense of the word: simply by being herself, she drew people toward her because she was truly a good and kind-hearted person.

She was preceded in death by her father and mother; three brothers, Roy, Nathaniel and Bobby and two sisters, Louise, and Shirley.

Left to cherish her memory are her devoted daughters, Valerie (Bert) and Rachel also known as Neicey (Keven); her grandchildren, Jordan, Garnet, Eve and Elena; her sisters, Lorene (Terrill) of Maryland, Mary Lee of Richmond, Erma of Newport News and Janice (Jonathan) of Richmond; devoted sister-in-law, Violet Brown, of Victoria and Gloria Bruce of Kenbridge; best friend, Dorothy Bell of Kenbridge and a host of nieces, nephews, cousins, other relatives and friends.