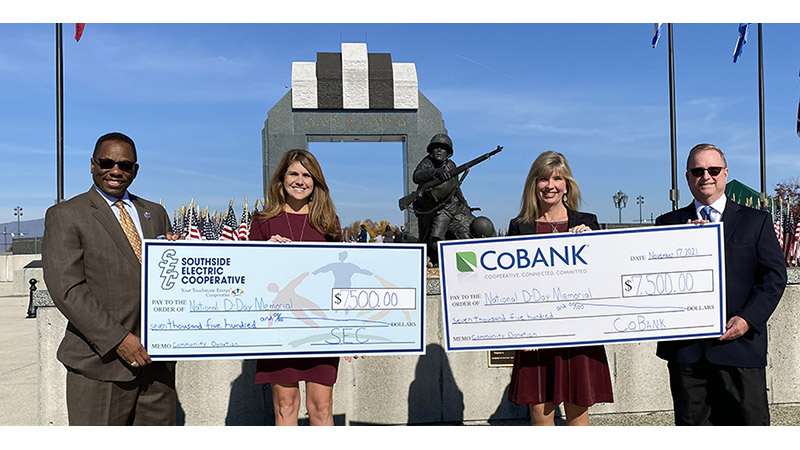 The donations from the cooperative and CoBank’s Sharing Success program will support the foundation’s plans to expand the D-Day Memorial located off U.S. 460. Initial plans call for an amphitheater and walking trail and later a welcome center, museum and education/event center in the design of what a French village would have looked like during the D-Day landing on June 6, 1944. Still considered the largest joint air, sea and land operation in history, the invasion was called Overlord.

“We are so grateful to Southside Electric Cooperative and CoBank for their support of the National D-Day Memorial and our veterans. It means a great deal to have SEC continue to give back to the community, and we are especially appreciative of how this allows us to appropriately recognize and pay tribute to those who have served and sacrificed for our country,” Cheek-Messier said.

Edwards, who has led SEC the last 14 years, said the cooperative was pleased to help with the D-Day Memorial’s expansion that will enhance the educational experience the memorial provides to visitors.

“We need to remember what happened. History is our greatest teacher,” Edwards said.

After the check presentations, Cheek-Messier led an hour-long tour for White, who served 22 years in the United States Army, and Edwards.

“This is one of the most moving experiences I’ve ever had walking through and seeing the statues and hearing the stories,” Edwards said.

Cheek-Messier told how Bedford had the highest per-capita D-Day losses of any community in the United States. Known as The Bedford Boys, the community lost 20 men on D-Day. Bedford’s D-Day Memorial is recognized as America’s national monument. It also stands in honor of all the men and women who have served in war and peacetime and continue to put on the uniforms of America’s armed forces. The memorial annually sees 60,000 in-person visitors and many more through virtual programs.

Since Sharing Success was started in 2012, CoBank and its customers, including SEC, have together contributed $56 million to community groups and programs.

Southside Electric Cooperative has 57,600 services across 18 counties in central and southern Virginia, including Bedford. Headquartered in Crewe, SEC has district offices in Altavista, Crewe, Dinwiddie and Powhatan. This institution is an equal opportunity provider and employer.