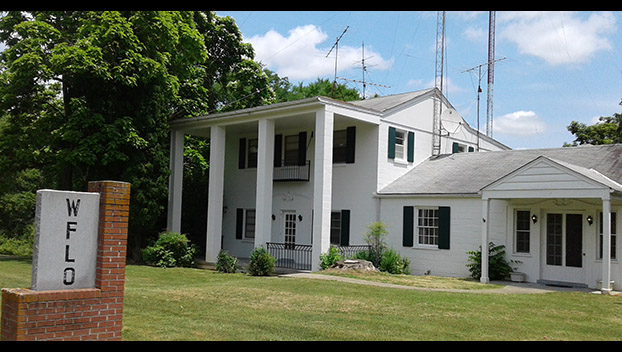 Radio Station WFLO, which has served central Virginia for more than 74 years, will be signing off for good Dec. 31 (Photo by Chris Brochon)

Farmville and all of central Virginia will be signing off for the last time at the end of 2021.

WFLO AM/FM President and General Manager Francis Wood recently announced that the last day of broadcasting on both WFLO-AM and FM will be Dec. 31.

“That is eight months short of serving central Virginia for 75 years,” he stated in a recent letter to WFLO clients. “It is sad but necessary, as the business climate has changed to a point where we are no longer able to continue our services. The choice to sell this monumental hometown community radio station comes with mixed feelings. At best, it is bittersweet.”

As noted on WFLO’s website, on Aug. 12, 1947, the Federal Communications Commission in Washington sent a telegram to the station giving it authority to commence broadcasting.

“Then you had seven other counties that we reached far into, and they were the fringe listeners,” Wood said, though the station’s FM transmitter going down recently has plagued the station since early November and has led to fringe listeners no longer being able to tune in to WFLO-FM 95.7 on the dial.

These recent struggles aside, he noted that WFLO, at 50,000 watts and featuring a 500-foot tower, has been one of the most powerful radio stations in the state of Virginia and especially in the Heart of Virginia.

The station has a Farmville address, and Farmville is its city of license. Wood added that the station’s studios were located on West Third Street from 1947 until the station moved in 1956 into its current building and studios on Route 45 North at 1582 Cumberland Road.

WFLO is owned by Colonial Broadcasting Company Inc. (CBC), of which Wood has been the president since 2013. He is in the process of selling radio station WFLO to Educational Media Foundation, which he noted is the biggest owner of radio stations in North America.

Wood noted that the building and a little more than seven acres of the property at 1582 Cumberland Road belongs to Henry Fulcher, long-time announcer, WFLO co-owner and CBC vice president.

As of Dec. 22, the sale of WFLO was still pending.

“What it’s pending on now is just some work that has to be finished on the tower,” Wood said. “Once that’s done, the deal closes.”

He expects the sale to happen shortly after New Year’s Day because he said most of the work to strengthen the tower has been done.

A variety of factors led to the sale of WFLO, with the business climate in the area being a primary one.

“The franchises that are here, they’re run by corporate,” Wood said. “They don’t buy local radio, they don’t support local media much at all, so your Walmarts, your Lowe’s, your tractor stores and even your fast food stores now, they don’t use radio. If they do, they buy national radio, which doesn’t put one penny in our pocket.

“And the other thing, in ’08 everything was really challenged, all kinds of businesses,” Wood continued, alluding to the economic downturn that has become known as the Great Recession. “A lot of the mom and pop stores went out then, and the economy, I don’t care what the government says, it never really fully recovered, it never has. And businesses that used radio back then before ’08 never came back to radio.

“It’s just a culmination of everything,” he added. “Then the COVID-19 (pandemic) came in and took out most of the other mom and pop stores, so they’re all gone, and those mom and pop stores were our bread and butter — that’s what kept us going.”

Wood said an additional factor has been the fact that the WFLO’s staff has not been refreshed with younger employees.

Fulcher has been broadcasting on WFLO for more than 65 years.

During his career, he has been recognized at the local, state and national levels, been on “Hee Haw,” met the big stars of country music, and he is honored at the Smithsonian Institution.

He reflected on the big change coming after Dec. 31.

He recalled how there used to be live bands in the studio and how he used to broadcast seven hours a day before some health difficulties forced him to lower that number.

“But the people, that’s what I’ll miss most is the people, because I love people,” he said.

He said he will be focusing on some other activities he has been involved in.

“I do quite a bit of speaking at churches and all, and so I’ll be maybe concentrating a little more on that, Lord willing,” he said.

What drew Wood to radio back in the late 1960s was music, and it is something he will miss about his job.

“I love music,” he said. “So I will miss getting up every day and going and doing my music shows. Besides that, WFLO, there was a lot of variety there, which I always liked. I can’t imagine going and doing one type of music and that’s it, so we did a lot of different varieties of music and specialty shows and stuff like that, so I’ll miss that a lot.

“The other thing that I will miss is the outreach to our community that WFLO was such a big part of for so many years, informing the community and everything. It was a real full-service radio station. We not only entertained people, we informed them, kept them up to date with all kinds of things going on in Farmville.”

Long-time part-time workers at the station have included William Lynn and David Wiley.