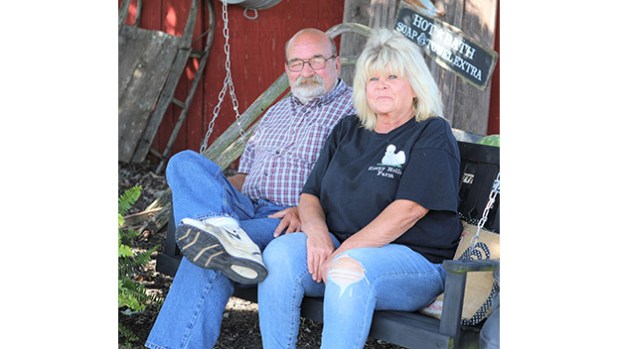 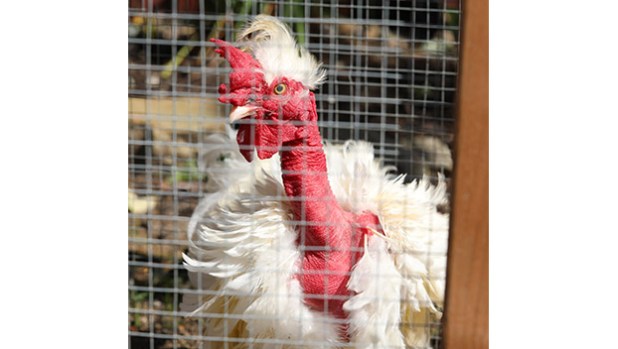 Chicken varieties raised by Jeff and Katina include Silkies, Katina with her chicken Little Red Riding Hood. Frizzles and Showgirls. 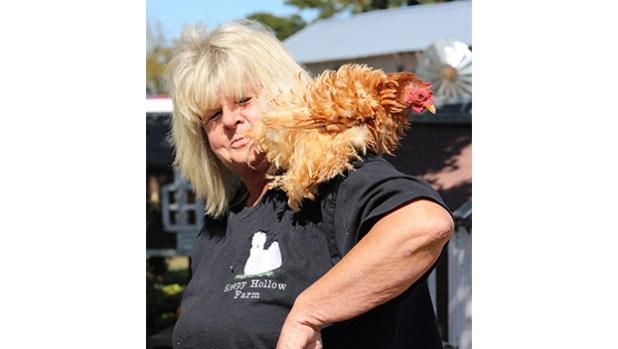 One afternoon, as Southside Electric Cooperative members Katina Wilson and Jeff Childers sat in their rocking chairs at their packhouse in Lunenburg County, they decided having a chicken coop out in the yard would be fun.

“I grew up with chickens and farm animals,” says Wilson. “I have always loved that lifestyle. When I started school, my show and tell was a duck named Donald. My grandmother met me outside the classroom so I could show everyone Donald the duck. To this day, I still name all my animals and have especially enjoyed naming all my chickens. We have names such as Henry the 8th, who lives with his four wives, Prince Charming, Hugh Hefner and Little Red Riding Hood, as well as Whiskey, the chicken coop village watchdog, Moon and Shine.

“We often have visitors come to the farm to see our chicken coop village. In addition to visits from children and parents, our friends love to come over to sit out in the late afternoon with a glass of wine.

Recently, a friend telephoned to tell me she was on her way over with biscuits to have a relaxing breakfast in the chicken village.

“Whenever we open a chicken house door, they flock out to greet us, as they always want Jeff and me to give them a bit of extra attention, especially if we have hot dogs, hamburgers or meal worms to share with them. I love talking to my chickens as I work with my flowers. Yes, I talk to my chickens. My Frizzle Little Red Riding Hood gets so happy when I am talking with her that she will jump on me and sit on my shoulder.

“Once a year, we host a chicken swap on the farm. People bring small farm animals to sell to those that come to buy. This is always great fun!” says Wilson.

While both Wilson and Childers admit that it takes a significant amount of time and work to maintain the 17 coops, they also attest to the joy the chickens and the entire chicken coop village brings them. By the way, bantam chicken eggs are not eaten.

“Yes, maintaining the village is almost a full-time job, even during the winter,” continues Wilson. “When it is cold, we do such things as set out straw for warmth and make sure that the chickens’ water does not freeze. During the spring, summer and fall, we always have blooming flowers, which must be tended.

“Interestingly, the old tobacco packinghouse where we often sit in our rocking chairs watching the chickens used to be a restaurant and dance hall. It was known as the Dundas Party House. Rumor has it that Willie Nelson came once!”

Childers adds, “While the farm requires a great deal of work, it also brings much joy, especially for Katina, and that makes me very happy.”

Wilson grew up in Florida on a small farm with her grandparents and brother about 45 miles from Destin and Fort Walton Beach. She moved to Lunenburg after serving as a quality control manager with Russell Corporation for 17 years.

Childers was born and raised in New Jersey with his parents and a sister in Toms River, where he later served as the facility director for Toms River School for 35 years. He also moved to Lunenburg after his retirement. The couple met in Lunenburg.

For four years, Wilson and Childers have provided custodial services at SEC’s Crewe offices. Recently, they also took on the Dinwiddie office.