The Garden Muse — The Easter Lily 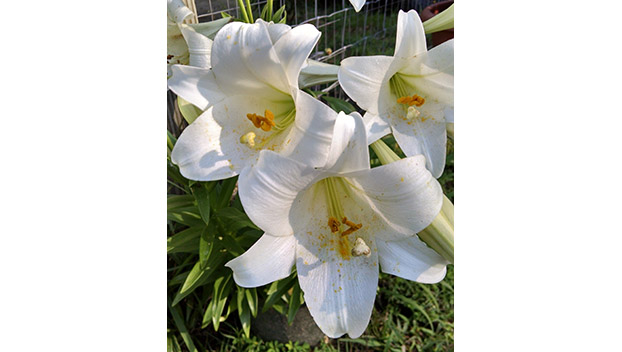 Lilium longiflorum more commonly known as the Easter Lily is native to Taiwan and the Ryukyu Islands. It was introduced to the U.S. in 1919 when a World War I veteran named Louis Houghton returned home with a few specimens from Japan. In addition to adding them to his garden he shared the exotic perennial bulbs with family and friends. Over time the Easter Lily kept gaining in popularity especially in the spring around the Easter holiday. During World War II the Japanese source of bulbs to the U.S. was abruptly cut off, encouraging propagation/production to become prominent in the United States.

There are at least 90 varied species of true lilies in the genus Lilium. Many flowers referred to as lilies today are in fact not true lilies but called so due to their scent or resemblance to the Lily. Some examples of false lilies are Day Lily (Hemerocallis), Lily of the Valley (Convallaria), Canna Lily (Canna; L.) and the Water Lily (Nymphaea.)

The Easter Lily represents Virtue, Hope and Life. Legend is that the Easter lily was created from Christ’s sweat and celebrates his resurrection. Hence the common name ‘Easter’ Lily.

Easter lilies will grow 1-3 feet tall and most have white flowers (single flower form.) Here in the U.S., they are forced to bloom early in the nurseys for commercial sales during early spring for the Easter holiday. With care they can be transplanted to the garden.

Sometimes confused for Easter lilies; The Asiatic Lily which is often grown commercially and forced to bloom early in the greenhouse for its wide range of colorful (often double flower form) blooms is easy to grow in the garden or containers and grows 1-4 feet tall. In the garden setting Asiatic Lilies are early summer bloomers.

The Oriental Lily will grow 2-5 feet tall, is also widely available in a wide range of colorful blooms and double flower form that bloom in late summer. It is the largest of the lilies and are also quite easy to grow.

If you are shopping for lilies and noticed ‘OA’ marked on the plants tag, that means the plant is a hybrid lily. A cross between an Oriental and Asiatic lily that will grow 30 to 40 inches tall. They are fragrant, summer blooming and come in a wide range of colors.

A tip for keeping commercially grown lilies from making a mess in the home is to gently pull the pollen covered stamens from the blooms.

If you wish to transplant your Easter lily to the garden wait until all danger of frost has past to harden off your lily for at least a week before doing so. Choose a sunny location where the soil is rich in organic compost and plant the lily to the depth it was in its original pot. Be sure to add a layer of mulch around the lily to keep the soil cool. Prune off any brown leaves and stem from the plant.

New growth will emerge throughout the summer, but your transplanted lily will not bloom again until the next season sometimes longer.

In the Fall trim the lily back to the ground once it has yellowed and wilted and cover with mulch for the winter.

The following spring a balanced fertilizer can be applied once a month until the lily begins to bloom.

Dawn Conrad is a Virginia Cooperative Extension Master Gardener, Herbal enthusiast, Writer and Fiber Artist. She can be contacted at dawn@ mygardenmuse.com.