Drivers urged to slow down 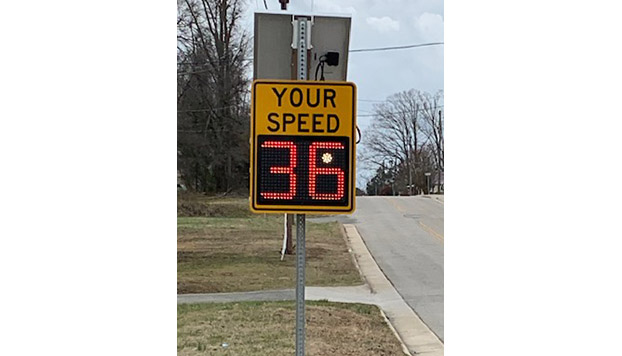 A driver feedback sign has been placed on Mecklenburg Avenue to alert drivers to their speed.

In an effort to reduce drivers speeding on Mecklenburg Avenue, the Town of Victoria has recently installed a driver feedback speed limit sign.

The speed limit sign will alert drivers to their speed and is currently located near the intersection of W. Seventh Street on Mecklenburg Avenue.

According to a release from the Town of Victoria, the sign will flash the speed in amber numbers at a set limit above the speed limit. If the speed is higher, the numbers will continue to flash in amber, and a strobe light will also begin flashing.

The numbers will change to red at a predetermined speed and alternate between red numbers and the words slow down.

According to town officials, the feedback sign is positioned so that it can be turned around and used for traffic coming into town as well.

Officials said that plans are to install several more of these signs around town in the coming months.

Since last year, speed on Mecklenburg Avenue has been an issue when several citizens addressed the Lunenburg County Board of Supervisors to express their concerns about speeding drivers and large trash trucks driving through the residential area.

According to Supervisor Edward Pennington, the speed at which drivers travel through Mecklenburg Avenue and truck drivers has become a problem.

“It’s a residential area, and they are coming through there at 45 mph, and it is a 25 mph speed limit,” Pennington said.

“The truck drivers are disregarding the truck route, and we have to take some type of action,” Pennington said. “It is putting a strain on that road and weakening it, and that is a heavily residential area with children. So sooner or later, it is going to be a major issue.”

Currently, trash trucks en route to and from the Lunenburg Landfill are advised to take two authorized truck routes. Mecklenburg Avenue is not on either of those routes.

According to the recent VDOT traffic study, during a seven-day traffic count between Sept. 7 and Sept. 14, 2021, there were 2,556 vehicles on Mecklenburg Avenue. Of that, only 2% was commercial traffic.

According to a 2019 and 2020 traffic count by VDOT, there was less than 2% significant truck traffic on Mecklenburg Avenue.

Since last year citizens and the BOS have asked for no through truck traffic signage and pedestrian signs.

According to VDOT, there is not enough significant truck traffic on Mecklenburg Avenue to warrant through truck restriction signage.

In addition to installing pedestrian signs, VDOT plans to trim vegetation on Mecklenburg Avenue to help drivers have clearer views of the roadway.