The Garden Muse — The Poppy a Symbol of Remembrance 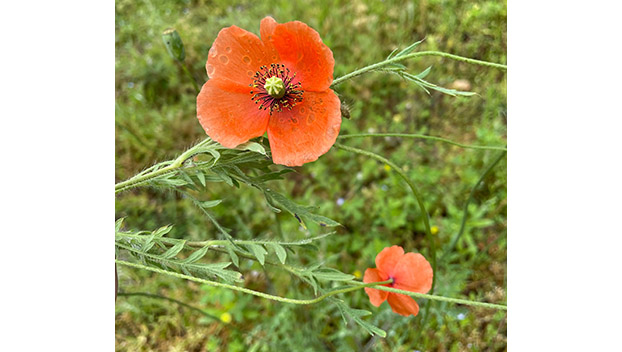 The Poppy originally linked to Armistice Day, November 11, now referred to as Veterans Day, had its popularity as a symbol of solemn remembrance reinvigorated in the landscape of the First World War.

As described in the poem ‘In Flanders Fields’ by John McCrae the poppies did indeed grow en masse in Northern France and Belgian Flanders. Flanders Fields was a major battle theatre on the western front from 1914-1918. To put the enormity into perspective; a million soldiers from over fifty countries were wounded, missing, or killed in action/buried there. The continual bombardment of World War I destroyed entire cities and villages. The poppies sprung forth from the disturbed ground and rubble most likely due to the lime in the fragmented masonry that served as fertilizer and a byproduct of nitrogen from the explosives.

The Poppy’s symbolism dates back in history far before WWI and WWII. Homer in The Iliad likens the “full blown poppy, overarched with rain, sinking to the ground” to the death of a trojan prince. Poppies were also depicted in decoration on jewelry and furniture found in Tutankhamun’s tomb.

Until recently, I believed that here in the U.S. poppies could only by grown by propagating commercial seed. I was delighted to learned that there does exist what I am referring to as ‘wild poppies’ right here in Lunenburg County. Papaver rhoes and Papaver dubium. Both listed below are not native to the U.S. and technically are not wildflowers in the U.S. they both were introduced by seed and opportunistically re-seed when conditions are optimum.

Papaver rhoes, red in color with a black spot at the flower base is also known as the common poppy, corn poppy, corn rose, field poppy, red poppy, and Flanders poppy. It is an annual herbaceous species often found in agricultural fields before herbicides became widely used. It is widely known as an agricultural weed by the Commonwealth of Nations. This poppy is grown in gardens and frequently found in “wildflower mix” seed packets.

Papaver dubium, light red to orange color commonly without a black spot at the base of the flower is also known as long-headed poppy and blindeyes. An annual species that prefers sandy soil and little lime. It is widespread throughout Europe and is now an introduction in the U.S. and elsewhere.

If you look closely at the right time of year both varieties can be found in agricultural areas along farmers fields and roadside ditches. My friend Lisa proved to me last week that this in fact is true!

The Beautiful poppy has a long and storied history. Please wear a red poppy on Friday, May 27 in remembrance of the fallen and hope for a peaceful future.

Dawn Conrad is a Virginia Cooperative Extension Master Gardener, Herbal enthusiast, Writer and Fiber Artist. She can be contacted at dawn@mygardenmuse.com.