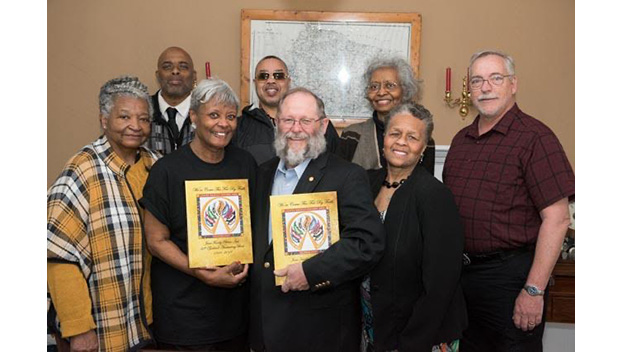 Special copies were presented to the Lunenburg County Historical Society and Lunenburg Public Libraries by Thelma Austin, publisher of the book, at the Visitors Center of the two Lunenburg Law Offices at Lunenburg Court House.

The 386-page, coffee-table book includes family history, sites of previous Reunions including several in Virginia, events of the 50th anniversary, profiles of over 300 members; honors the memory of family members, the nine children of Sib and Daphne Jones whose names appear on feathers on the family crest; a synopsis of African American history, and other elements.

The Jones Family Union, Inc., had its origins in Nottoway and Lunenburg Counties.

Members are descendants of Sib Jones, a free Black, and his wife Daphne Jones, a former slave – both of Nottoway. After slavery, the couple moved to Lunenburg where they had nine children, 69 grandchildren, and an incredible number of descendants.

The Jones Family Union, Inc., was founded in Victoria in 1969 by William D. Jones, a grandson of Sib and Daphne Jones. Daisy Jones, who lives near Victoria and is a member of the Lunenburg County Historical Society, is the daughter of William D. Jones, the founder.

She assisted in making the presentations to the historical societies and public libraries of both Lunenburg and Nottoway.

Since 1969, reunions have been hosted annually in a sequence of five chapters: New York/New Jersey; Philadelphia; Baltimore/Washington; Virginia; and Atlanta/Charlotte. There is also a California Delegation.