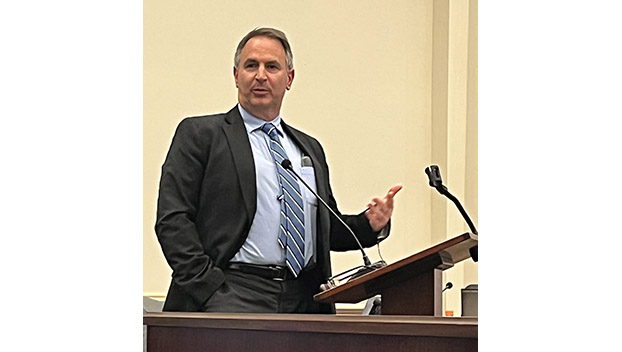 Robert Hawthorne Jr. told the board of supervisors on Thursday, June 9, that solar will bring opportunities to the county.

After more than two years of work and negotiations, the Lunenburg County Board of Supervisors (BOS) acted on a Conditional Use Permit and siting agreement for the development of the 130 MW solar facility by Apex Clean Energy of Charlottesville and SolUnesco of Reston.

Developers submitted their application for Red Brick Solar in April 2020.

During the June 9 BOS meeting, supervisors voted to approve a siting agreement that has been at the forefront of the project’s holdup.

Before the vote, John Puvak of Gentry Locke Attorneys, who represents Red Brick Solar, said developers would be investing 16.1 million into the County for the life of the project.

“Red Brick will put up over $2 million before construction even starts,” Puvak said.

According to the siting agreement, Red Brick will pay the County the $500,000 within 60 days after the County’s approval of the CUP.

In addition, the developer will pay the County the amount of $583,334 within 30 days after the Virginia Department of Environmental Quality’s final approval of the permit by rule application.

According to Director of Project Development for Apex Clean Energy, Jeff Hammond, construction on the facility could start in June of 2023.

Before the vote, several citizens took to the podium to express their concerns.

“This is right behind me … maybe about a half a mile,” Abby Barnes said.

Barnes, who said she was not against solar, wanted to know what was in place in case her water was to become contaminated.

“Whether you like it or not solar is the way of the future, and I am in support of this,” said Mac Bailey.

Robert Hawthorne Jr. took the opportunity to point out several citizens that had joined him for the meeting that was also in favor of solar. “They can see the opportunity that solar can bring,” Hawthorne said. “Most of the oppositions you hear do not come from people who live here or near it. It’s in my front yard essentially, and I’m fine with it.”