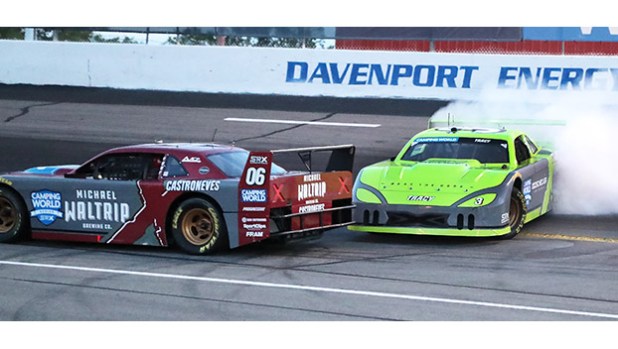 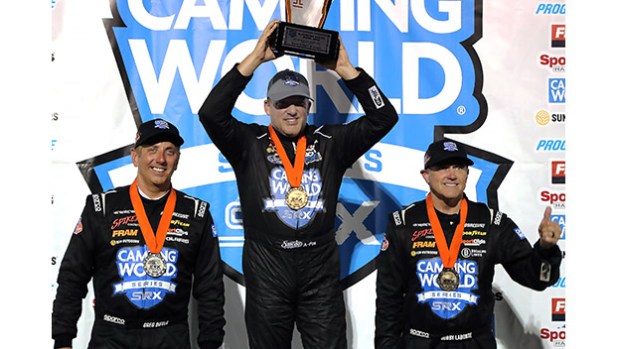 Tony Stewart knows what it feels like to win a race at South Boston Speedway.

Stewart topped a field of legendary racing stars Saturday night in the 100-lap feature race that headlined the SRX (Superstar Racing Experience) event at South Boston Speedway in front of a packed house of fans and a national television audience.

“The USAC midget series was tough when I was here,” Stewart pointed out.

“It was an honor to win that race. You look at the field of drivers we race with (in SRX), it’s the best of the best from different forms of motorsports. Anytime you can beat those guys there is a lot of pride in it.”

Stewart said he knew Biffle was behind him and trying to make a bid for the lead and the win.

Biffle said he did all he could to try to get to Stewart’s rear bumper.

“I wanted to try to make it exciting,” Biffle remarked.

“I just couldn’t get there. Tony just took care of his stuff a little better. He just had a little better tire than I did. I was doing all I could, overdriving the corner.”

Labonte described his night as an “OK” night.

“I was probably a little better in the heat races,” Labonte said.

“It wasn’t the night we wanted,” Sellers said.

“They (the SRX personnel) prepared me a really nice car. I think the sway bar was unhooked late in the race. In the heat race, I was kind of saving my tires. I said, ‘you know what, I think we’ve got something to race with.’ But, in the feature race, it just wasn’t there. Something just wasn’t quite right. It was a great experience.”

The win was Barnes’ fifth win in eight starts and was his sixth top-five finish of the season at the .4-mile oval.

Jason Myers of Hurt finished second, 3.364 seconds behind Barnes, with Chris Donnelly of Montross finishing third. Donnelly was the final driver to finish on the lead lap.

NEXT RACE AT SOUTH BOSTON SPEEDWAY

A 200-lap race paying $10,000 to win is the first race in the Virginia Late Model Triple Crown series.

South Boston Speedway will honor America by capping the night with one of the area’s most dazzling Fourth of July fireworks displays.

Advance are available for $15 each plus a $1.50 processing fee. The advance tickets may be purchased online on the South Boston Speedway website or by calling the speedway office. Tickets at the gate on race day will be $20 each.

The latest updates and news can be found on the speedway’s website, southbostonspeedway.com. Information also can be obtained by phoning the speedway at (434) 572-4947.