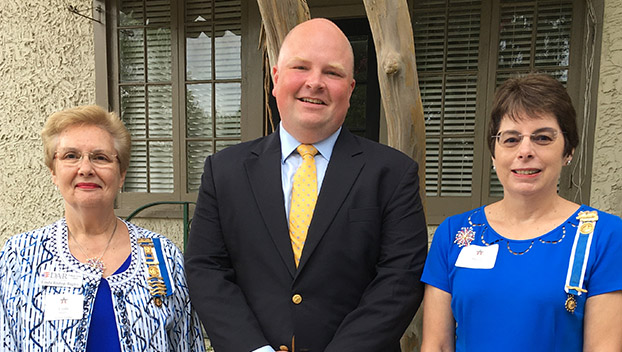 It was a fine day for the local William Taylor Chapter when District III of the Virginia Daughters of the American Revolution met on August 6 in Lynchburg. The chapter was represented by two district officers: Secretary Merny Erby and Chaplain Linda Bagley, both from Lunenburg. In addition, the guest speaker, Adam T. Erby, is also a native of Lunenburg County.

Erby, the son of Merny and Gordon Erby of Victoria, is the Curator of Fine and Decorative Arts at George Washington’s Mount Vernon. He is known internationally as an expert in that field of restorative arts.

Much restoration work at Mount Vernon has taken place – and continues – under Erby’s direction during his tenure there. The ultimate goal is the full restoration of the property, with work expected to be completed by 2026, the celebration year of the 250th anniversary of the signing of the Declaration of Independence.