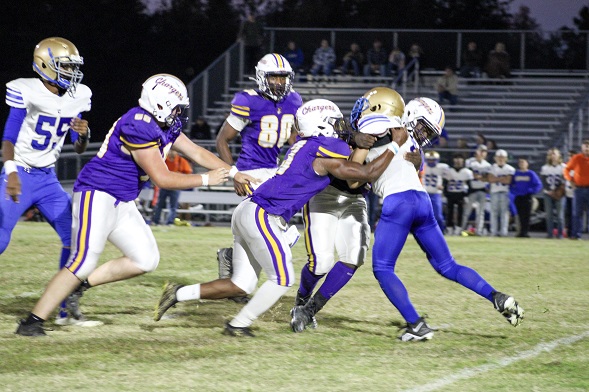 With a 22-8 triumph over James River District foe Amelia County, the Central Lunenburg Chargers wrapped up an unblemished regular season last Friday, the program’s first since 1995.

Riverheads (8-1), the reigning six-time State Champions in Class 1, secured the top seed in Region 1B by virtue of its win over Class 2 Stuarts Draft in the regular season finale.

The Lunenburg offense has been a well-oiled machine all season long, headlined by Donelle ‘Bam’ Jones, who rushed for 950 yards and 17 touchdowns on 105 attempts. Jones also has 58 total tackles, 27 for loss, five forced fumbles, two fumble recoveries and a defensive touchdown.

Right behind on the ground attack were senior Kemarion Watson (95 attempts, 802 yards, 10 TDs) and sophomore Amarion Moore (83 attempts, 711 yards, 7 TDs), together totaling more than 1500 yards on the ground with 15 rushing scores.

Connor Mattox has been efficient at the quarterback position, completing 59% of his throws for 334 yards and 10 touchdowns compared to only interception. Defensively, he also made 54 total tackles and three interceptions, returning two for touchdowns.

Most impressively, 11 different players on offense scored a touchdown for Lunenburg, which averaged 43 points per game. That’s the highest scoring average in school history, surpassing their 41,6 PPG from 1985.

As great as the offense has been, coach Will Thomas loves the fact his defense is one of the stingiest in the state, yielding just 8.6 points per contest. The Chargers came up with 30 takeaways on defense, 17 off interceptions, during the regular season.

Senior defensive end Jamel Alexander led the defense with a team-high 76 total tackles, 30 behind the line of scrimmage with six forced fumbles and two blocked kicks. Additionally, Alexander is the team’s leading pass catcher with eight receptions for 168 yards and 4 TD’s.

Where does Central Lunenburg play next?

Accompanying Central’s undefeated season is a first round bye for the upcoming Region 1B playoffs, where they will await the winner of the quarterfinal match this week between No. 3 seed Buffalo Gap (6-4) and No. 6 seed William Campbell (3-7).

A forfeit victory over winless Cumberland did not provide much benefit to the final power rating for Seth Wilkerson’s Buckingham Knights, who closed out the regular season with victories in eight of their final nine games for an 8-2 overall record and the No. 6 seed for the Region 2B playoffs. That gives Buckingham a first round matchup at third-seeded Central-Woodstock (8-2), which last year made it to the state semifinals and captured the Region 2B Championship.

This marks the first ever meeting between the Knights and Central-Woodstock, who averaged 35.6 points per game and allowed 12.3 points per contest. Their lone two defeats were courtesy of Bull Run District rivals Luray (41-25) and Strasburg (22-17).

The only two losses for Buckingham came at the hands of five-time State Champ Appomattox, 37-24 in their season opener, and 14-0 to unbeaten Central-Lunenburg back on Oct. 27. The Knights’ success largely hinges on their ground attack and physical o-line paving the way for senior ball carriers Kymeir Lockett and Kenneth ‘K.J.’ Williams. Through the first seven games, Lockett and Williams combined to rush for 1822 yards and 22 touchdowns on 136 carries, an average of 13.4 yards per pop.

But the Buckingham defense has also stepped up as the season has progressed, limiting opponents to 7.4 points per game during their seven-game winning streak. Contributions have come from a host of players, including Williams, senior Rocco Raynor and senior Jevonte Jones.

Of the eight teams in the Region 2B playoff field, only one – eighth-seeded East Rockingham (4-6) – enters with a record below .500. Even East Rock showed it can be formidable by beating Luray, the No. 2 seed in the region, by a count of 35-14 back on Oct. 14.

Strasburg (9-1), the region’s top seed, has won every game it has played on the field with its lone blemish being a forfeit to Skyline.