Interview — Laura Haddock for The Recruit 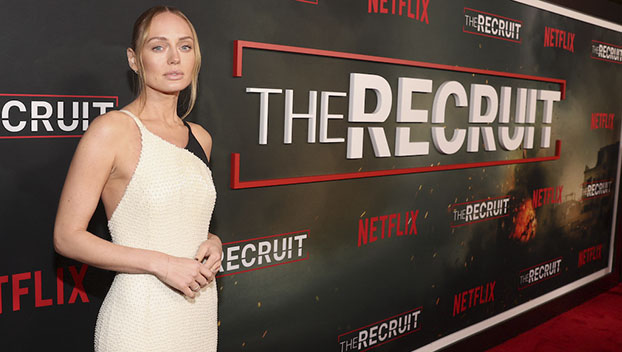 Netflix’s new spy series THE RECRUIT is an entertaining, thrilling take on the spy genre. Instead of focusing on a case officer, the series follows Owen (Noah Centineo) a newly hired CIA lawyer that immediately gets in over his head. Fresh out of law school, he is tasked to handle the agency’s “graymail,” or the hundreds of letters that come in every day that threaten to expose state secrets.

Most of the mail is nonsense, but one letter from Max Meladze (Laura Haddock), a Russian woman sitting in an American jail for murder, stands out among the rest. She claims to be a former CIA asset and based on the content of her letter, it’s clear she knows too much about internal CIA processes for this to be anything other than legitimate. So Owen sets out to meet her face to face… an encounter that changes the entire trajectory of his life.

I am so excited that Netflix decided to include Washington, DC in THE RECRUIT’s press tour. We were able to interview the cast and filmmakers behind the series and attend a screening of the pilot episode at the International Spy Museum! I had the opportunity to speak to Laura Haddock and could have talked to her for hours about all of the work it took to develop her character, but first we dove into Max’s edgy look and how Laura developed it.

“It was a really collaborative process… but it was really built in the hair and makeup truck. I wanted to do something that was edgy and a bit more dangerous because I wanted to feel angular and strong and to have an edgier look. In fact, I think it lives and dies on that fringe. We kept cutting the fringe a bit shorter and shorter and we landed on this point and I was like, ‘That’s it! That’s perfect.’ I was very particular about the length of that fringe… I was covered in tattoos. It was fun to build Max.”

I had to ask Laura about working with the incredible Doug Liman, who directs the first two episodes of the series and is an executive producer. Liman has directed some of the most iconic spy movies in cinema history, including THE BOURNE IDENTITY and MR. AND MRS. SMITH. And his expertise is felt throughout the series, particularly in the incredible action scenes and frenetic pacing. I was interested to hear if he gave Laura any tips about working on a spy project like this.

“Doug creates this fizzy, buzzy space just to play. I love the way his mind works. It’s just wide open, lateral, it’s almost like he’s in space and he’s got all of these planets up there and you’re like ‘Let me just jump on one of those planets for a second and let’s have fun and go on a little adventure together.’ He gave me the space to try things and be brave and find [Max’s] voice and physicality… he’s just an amazing director.”

Laura is amazing at accents, from her role as a Russian asset in THE RECRUIT to her performance in DOWNTON ABBEY: A NEW ERA, where she plays a silent actress that struggles when film transitions to talkies due to her :ahem: less than ideal accent. “It’s my favorite space to occupy; I like being in an accent. I feel way freer in an accent. I’ve always been really interested in listening to people’s voices ever since I was little and doing a lot of imitating accents. It informs a lot of things for a person, like the way they walk, the way they move, the way they hold themselves. And with the Russian accent, it’s a very particular melody. My voice is very sing-songy and I move about with it a lot and I change its pitch and tone. With the Russian accent, I wanted to bring it down and have it feel grounded. There’s no messing, [Max] knows what she wants to say, she knows how to communicate it, and it’s very blunt and practical… with a flavor of sarcasm and clever humor. I worked with a dialect coach who I’ve worked with a few times, the same dialect coach I worked with on DOWNTON. She’s amazing and she guides me through these different accents I want to do.”

THE RECRUIT has incredible action scenes, many of the best revolving around Max. Laura looked so natural in the fight scenes, an element that was super important to her when building the role. “For Max’s physicality, I wanted her to be really strong, really alive, really ready to get into any situation and get out of it alive. She would obviously be well-trained in so many different skills and I wanted to make sure when she showed up to a situation, we felt like Max has got this, whether she is fighting a woman, a man, or multiple different people, I wanted the audience to believe Max could win. I worked very closely with the stunt team, and I love working with the stunt team.”

I especially found it interesting to listen to Laura talk about how she and her stunt double worked on Max’s fighting style and how she would carry herself when pitted against the bad guys. Flavie, who is based in Montreal, was my stunt person. She was the best and we spoke a lot about how Max walked, how she moved, how she entered the room, how she exited the room, what she looked like when she was running, where her eyes were placed in a fight and what that did to her head. Physically we were trying to mirror each other using a different physicality to our own. I tried everything, but there’s a real blend of Flavie and me.”

THE RECRUIT is definitely not a spy series you have seen before, which is a lot to say for a genre that has several new entries every year. It is funny, quirky, high-speed, and shows some of the elements of the spy world that are probably more similar to real-life, which was my favorite part of the series. For example, the series shows the tedious elements of the bureaucracy that are commonplace in any government job. And instead of driving a James Bond-esque Maserati, Owen actually drives an average rental car. Owen isn’t like other spies that know how to fight a bad guy immediately, he can barely unlock his car in time to get away and has no idea how to fire a gun properly. But it was these elements that immediately pulled me in, and by the end of the series (especially after the last 3 minutes), you will be wondering about a second season and going to Noah and Laura’s social media to see if there is any news.

THE RECRUIT begins streaming on Netflix on Dec. 16.