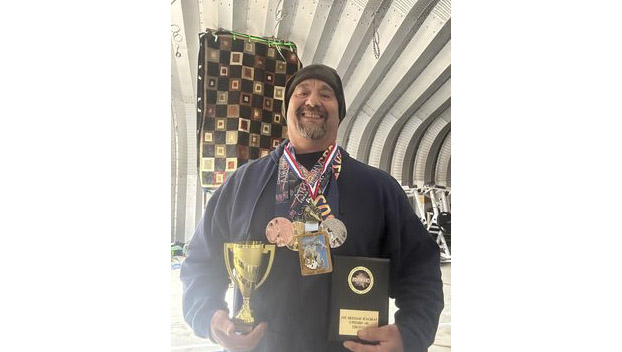 A Lunenburg native and graduate of Central High School has ranked number one in his sport.

Throwing shot put is familiar to Corning as he was the district champion in the shot put and the discus in 1982 at Central High School.

“I have been competing for one year and I have three gold medals, one silver medal in the shot put and a bronze medal in the discus,” Corning said.

The 58-year-old said it was by accident that he saw an advertisement for the Virginia Commonwealth State games on the Internet. After looking at the distances men his age were throwing, he was convinced that he could do just as well, so he began training.

“I have my own training facility and gym on my property with an indoor throwing area so that I can practice year-round,” Corning said.

In Dec. 2021, Corning competed for the first time in the winter Virginia Commonwealth Indoor games as a “rookie“ in the age 55-59 shot put.

“This was my first meet since high school and I placed first in my division and was twelfth in the nation in my age group in the shot put,” he said. “I am still the Indoor Virginia State indoor champion today.”

According to Corning, on Dec. 11, he competed in the Virginia Beach Atlantic Coast invitational track meet and where he placed first in his age group division in the shot put.

“I competed with a severe injury to my left shoulder,” Corning said. “I had torn the rotator cuff in training just days before the meet.”

In July, Corning competed in the Virginia Commonwealth summer games and placed second in the outdoor shot put in the 55-59 age group.

In November, he competed in the Virginia Beast Invitational Track Meet in Virginia Beach where he placed first in the 55-59 age group and through a personal best. “That throw has put me in the second position in the world for my age group,” Corning said.

Corning said due to his injury he will likely take a few months off and return to competition in March to compete in the AAU Indoor National Championships.