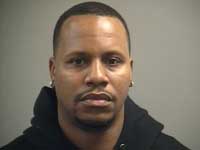 Kenyatti M. Peterson (39), of Alberta, was sentenced to an active sentence of two years and nine months in prison recently in Lunenburg Circuit Court, upon pleading guilty to one felony of distribution of cocaine. He has an additional seven years and three months suspended upon numerous conditions.

According to Lunenburg County Commonwealth’s Attorney Robert Clement, the local narcotics task force, under the direction of Lunenburg County Deputy Sheriff Brian Burns, worked an undercover operation on Feb. 15, 2013 and purchased $200 in cocaine from Peterson. The task force waited until other operations at that time were completed over a period of a year, and until other issues could be completed before Peterson was indicted on Feb. 2. He was not located for arrest until Sept. 21..

The active sentence, of which Peterson will serve 85 percent, is about three times the typical sentence for a first-time conviction of distribution of cocaine, but Peterson’s sentencing guidelines were higher because of a 2011 conviction of unlawful wounding.

Peterson’s additional seven years and three months are suspended upon conditions of good behavior, supervised probation upon his release for one year, warrantless searches and seizures, counseling and restitution of $690.

He also faces a possible revocation of a previously suspended prison sentence in Brunswick County.