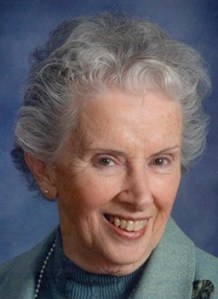 Marian Elizabeth Saunders Kessler was born on Oct. 8, 1931, on the farm of her parents, Clyde Raymond and Ruth Garner Gee Saunders, in Lunenburg County.

She received her BA from Lynchburg College in 1954 and her Masters in Christian Education from Emory University’s Candler School of Theology in 1955, the same year she and Bill married on June 9.

While Bill served as a minister with the Virginia United Methodist Conference, she taught in the neighboring elementary schools for the next 28 years. After completing course work at Old Dominion University, she added librarian credentials to her resume and worked as a Media Center Specialist (Librarian) until her retirement in 1994 from the York County Public School system.

Marian was an active minister’s wife and embraced each church congregation with enthusiasm. She created a loving home at the 11 Methodist parsonages where they lived for their daughter, Kerrie, and son, Paul.

Marian loved her family and delighted in happy hours poring over family documents and traveling to genealogical libraries on the east coast researching nuggets of information about her extended family. She and her sister, Garnette, published Gee Family Tree in 2001. She suggested keeping our extended family connected by setting aside time for an annual beach week. We had our first Saunders Beach Week in 1995 and we have had a great turnout every year.

Upon retirement, she and Bill enjoyed living in Williamsburg and Raleigh, North Carolina before settling in Marion, North Carolina in 2009. They enjoyed their church relationship at First United Methodist Church of Marion and the Neel Parker Sunday School class. Given her love of genealogy, she was a proud member of the Greenlee Chapter of the Daughters of the American Revolution and enjoyed her role as Registrar to help new members find their ancestries.

She departed this life on Jan. 10. Preceding her in death was her husband of 57 years, Bill, and her sister, Betty Jean Goad.

The family would like to acknowledge Margaret Love, Linda Cannon and Ritchel Smith, who brought dignity and joy to her last years. They would also like to extend their gratitude to the staff at Rose Hill Retirement Community and Hospice of the Carolina Foothills for their compassionate care and support.